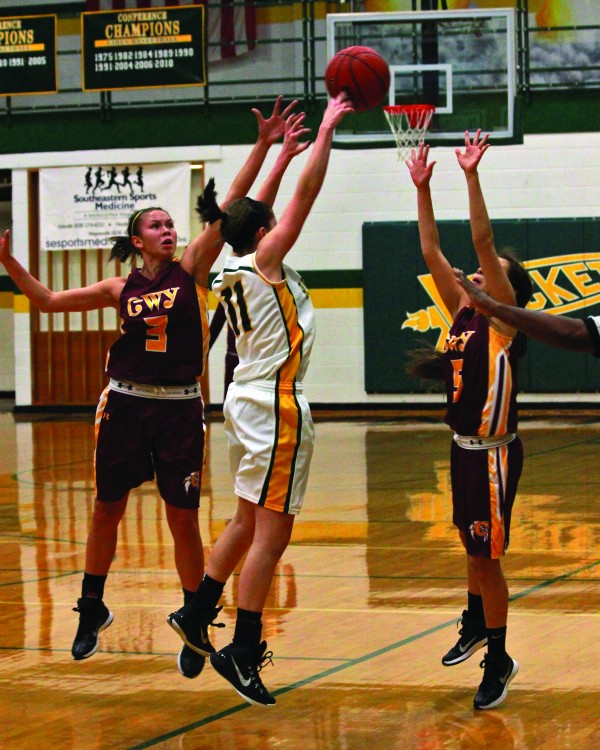 ASHEVILLE – The Cherokee Lady Braves traveled to Asheville on Thursday, Dec. 11 for a non-conference showdown against the 3-A AC Reynolds Lady Rockets.  The Lady Braves outmatched a physical and disciplined Reynolds team with another stout defensive performance, snaring a 52-31 victory.

“I thought we hustled like crazy,” said Chris Mintz, Lady Braves head coach.  “That kept us in the game early when we weren’t shooting the ball well.  We were getting some turnovers and making it a game that we wanted.  They had the definite size advantage.  They are a really physical team, and it was a very physical game.”

To begin the game, the Lady Rockets had a hard time finding a handle on the ball as the stingy Cherokee defense ran a full-court press, effectively keeping the ball on Cherokee’s side of the court for the majority of the first quarter and keeping Reynolds off the scoreboard until the 1:43 mark.  Cherokee would take a 14-6 lead to the bench at the end of the first quarter.

Reynolds would come out strong in the second quarter, closing the gap to 23-17 in favor of the Lady Braves going into halftime.  However, it was a defensive battle in the third quarter when both squads starting turning up the heat defensively as a full-court press was utilized by both teams making the third quarter of play a low scoring affair.

The physicality of the Lady Rockets defense began to peak in the fourth quarter, but the relatively young Lady Braves remained unfazed and outscored Reynolds 19-6 to pull away for another victory.

After the game, Coach Mintz commented, “It was really physical.  It wasn’t our best shooting performance but we battled through it.  We made some big plays when we needed to and ran it out at the end.  It was a good team (we played). “

“We are definitely going to work on our ball handling.  I knew it was going to be different because they play at a different speed than what we had seen in the first two games, but I think we adjusted well.”

To view and purchase photos from this game, visit https://onefeather.smugmug.com/SPORTS/BASKETBALL/LADY-BRAVES-BASKETBALL-201415/At-AC-Reynolds-December-11/