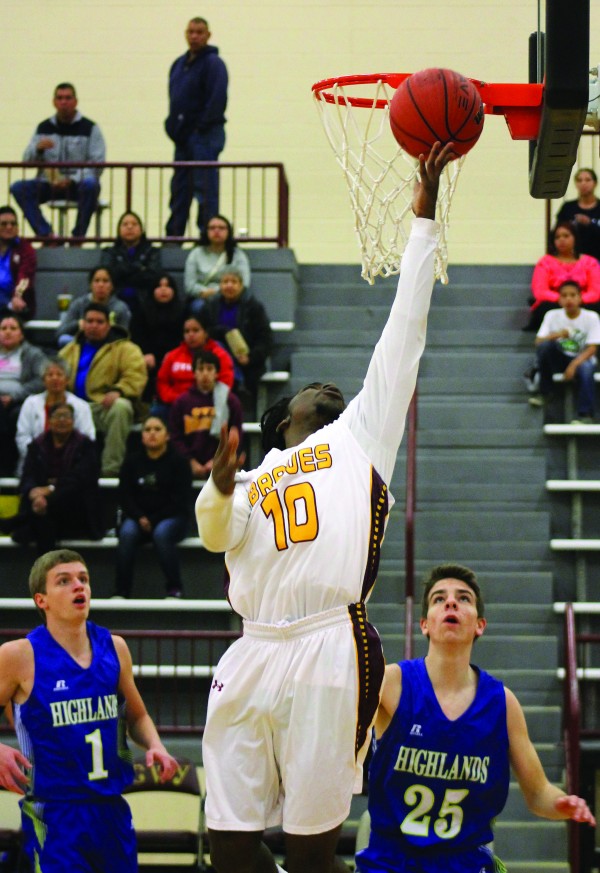 The Braves (4-0) finished a busy week of basketball undefeated and in style with a big 78-49 win over the Highlands Highlanders at home on Friday, Dec. 12.

“We were tired, that game last night was tough.  We had to play our top eight players most of the ball game,” Willis Tullos, Braves head coach commented after the game referring to their game at A.C. Reynolds the night before.  “I knew their legs were going to be weary, but overall I thought they sucked it up and did a good job.”

Due to the tough game the night before, Cherokee relied heavily on their bench in the Highlands game and Coach Tullos praised their play.  “They did good.  They played really well.  Our subs went out and played the way you play in practice.”

Despite their tired legs, Cherokee came out on fire in this game and scored seven points in the first minute taking a7-0 lead before the Highlands coach called a time out to slow things down.

The second quarter was much the same as the Braves extended their lead to 49-18 at the half.  Coming out of the locker room for the third quarter, both teams slowed some and both teams collectively only scored 10 points in the first four minutes of the quarter.  But, it picked up and Cherokee was able to get lots of bench play and lead 65-31 at the end of the third.

Highlands actually outscored Cherokee in the fourth, but it was much too late as the Braves took the big win.

Individual stats were not provided for this game by press time.

To view and purchase photos from this game, visit https://onefeather.smugmug.com/SPORTS/BASKETBALL/BRAVES-BASKETBALL-201415/Vs-Highlands-December-12/