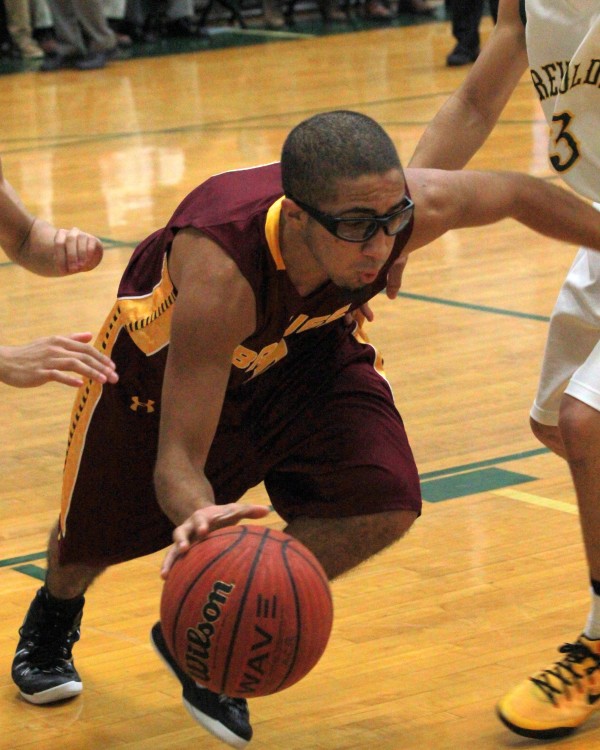 ASHEVILLE – Cherokee handled their first major test of the season with relative ease on Thursday, Dec. 11 when the Dustin Johnson-led Braves grounded the AC Reynolds Rockets 78-56 at an away game in Asheville.  Johnson scored a game-high 28 points, followed by Brandt Sutton with 18.

“They all did a great job,” said Willis Tullos, Braves head coach.  “Dustin Johnson on offense, J.J. (Benjamin) on the boards on defense, Jason McMillan played great on defense.  Kennan Panther got some big rebounds and big baskets.   Brandt Sutton made some big baskets in the second half, every one of them that started had an all-around good performance.”

The Braves took control of the game early when Keenan Panther snared the opening tip-off from the clutches of a Rockets player and put the Braves on the board first.  Reynolds answered with a quick basket, but the Braves offense would not be easily deterred and jumped out to a quick lead.  As the game wore on, the Braves defense tightened up and befuddled the Rockets ball handlers.  The Braves took a 30-14 lead to the bench after the first quarter.

The game slowed down in the third quarter when the Braves froze the ball.  However, action picked up late in the fourth quarter when Reynolds made a comeback attempt that fell short to the stifling Braves defense.

The Rockets were heading into Thursday’s night matchup with only a single mark in the loss column which came at the hands of the Patton Panthers from Morganton on Wednesday night.  Prior to the Wednesday night 80-74 loss, the Rockets had beaten all other teams by 22 points or more, averaging 72.4 points per game.

“It’s the most points we’ve given up all year,” said Coach Tullos.  “We expected them to be physical and rebound well, but I felt our kids hung in there real well with them.  They gave a great effort, played really hard on defense and the first half was probably the best I’ve ever had a team play.”

To view or purchase photos from this game, visit https://onefeather.smugmug.com/SPORTS/BASKETBALL/BRAVES-BASKETBALL-201415/At-AC-Reynolds-December-11/