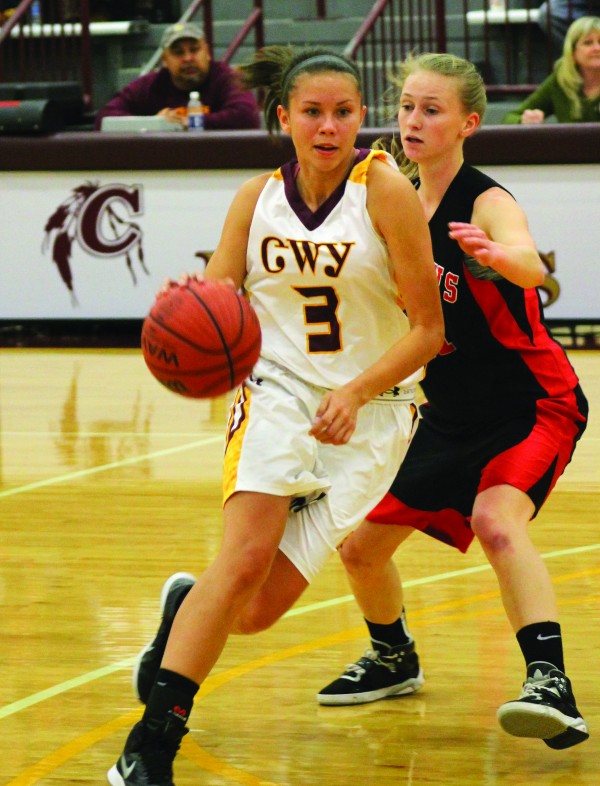 The Lady Braves (2-0) were impressive in their first home game which ended in a 76-27 rout of the Andrews Lady Wildcats on Tuesday, Dec. 9.  Kendall Toineeta, senior point guard, led Cherokee and nearly outscored the entire Andrews team with 26 points.

Although the game ended very one-sided, it started quite slowly.  Neither team scored in the first few minutes until Toineeta broke the ice with a basket at the 5:40 mark in the first.

“I guess that’s what we’re going to do this year – start slowly,” joked Chris Mintz, Lady Braves head coach, after the game.  “I told them at halftime how displeased I was with their play in the first half, and in the second half they played really, really well so we just have to keep working to get better.” 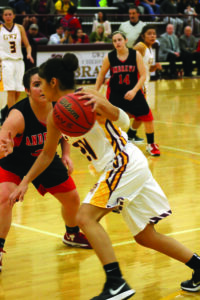 Tiffani Riggins (#24), Lady Braves senior guard, dribbles past Andrews’ Haley West (#32) in the second half of Tuesday’s home game. Riggins had 10 points on the night.

Coach Mintz is pleased with their play, but said they will continue to improve.  “We need to handle the ball better.  Sometimes we pass it around like it’s a hot potato.  We just need to take better care of the ball and we’ll be ok.”

Following their slow start, Cherokee came on a little and had a 13-5 lead in the waning second of the first quarter when Macie Welch, freshman point guard, hit a three-point shot at the buzzer to make it 16-5 at the end of the quarter.  Welch finished with 8 points on the night.

The Lady Braves outscored Andrews 22-12 in the second quarter and lightning struck twice as Welch hit a three-point shot with two seconds left in the half to give Cherokee a 38-17 lead going into the locker room.

Coach Mintz’s locker room pep talk obviously worked as Cherokee came out on fire in the third quarter and blitzed the Lady Wildcats 27-10 to take a 66-27 lead into the final quarter.  Due to the large lead, Cherokee was able to get some nice bench play in this game and the starters sat for most of the fourth quarter.

Cherokee blanked Andrews 11-0 in the fourth to take the 76-27 victory.

To view and purchase photos from this game, visit https://onefeather.smugmug.com/SPORTS/BASKETBALL/LADY-BRAVES-BASKETBALL-201415/Vs-Andrews-December-9/