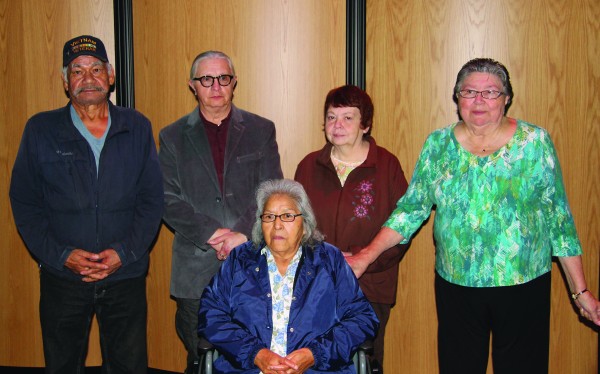 “When an elder is telling you something, they’re not chastising you, they’re trying to help you because they love you,” said Shawn Crowe who served as the emcee for the event.  “They have lived a live that can educate you so you don’t make the same mistakes.”

He admonished the students to pay attention to the elders and their wisdom because one day they would have to step into that role, “You are the elders of tomorrow.”

Each elder honored on Friday was interviewed by students who, in turn, wrote biographies which were read by Crowe at the event.  The following students participated as writers and interviewers:  Laurel Welch, Kieran Sequoyah, Devy George, Brittany Driver, Tiffany Riggen, Nick Cucumber, Destiny Paugh, Lauren Luther and Kalista Luther.

The elders also each gave the students a piece of advice during their interviews including:

Maj. Bill Underwood, CHS JROTC program, gave the opening prayer and the JROTC Color Guard posted and retired the colors.  The Cherokee Traditional Singers recited the Pledge of Allegiance in the Cherokee language and then sang “America the Beautiful” in the language.  The Cherokee Middle School gave a special musical presentation and Robert Running Wolfe performed each of the elders’ favorite songs for them including The Beatles’ “Hey Jude” (Linda Saunooke) and Willie Nelson’s “On the Road Again” (Bob Reed).