“We are excited to have Cassius joining our Southeast Region leadership team,” Austin said.  “He has a great reputation as a leader and has proven his ability to effectively work with partners, stakeholders and local communities.  We know that he will be an excellent steward of the Smokies, one of the crown jewels of the Southeast Region.” 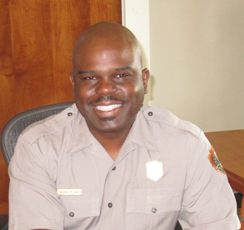 “I wholeheartedly look forward to rolling up my sleeves and working with and learning from a group of dedicated employees at the park who have the privilege of and responsibility for preserving and protecting some of the most precious natural and cultural resources in the country,” Cash said.  “I also look forward to working with local communities, friends groups, and tribal communities on how the National Park Service can build on innovative ideas to create the next generation of stewards and supporters for this park. The timing for this is excellent because the park service will enter its second century of service to the nation when it observes its Centennial in 2016.”

Cash has served as superintendent at the Boston parks since 2010.  While there, he worked with the City of Boston to open a new visitor center in historic Faneuil Hall.  That facility now welcomes more than 5 million visitors a year.  Cash also worked with several park partners to secure $4 million to reopen the African Meeting House, the oldest black church still in its original location in the country.

Cash began his federal career in 1991with the U.S. Forest Service as a wildlife biologist at the Gifford Pinchot National Forest in Washington State.  He went on to work with that agency for 18 years in various leadership positions.

He served as an administrative officer in Nebraska, district ranger in Georgia, and a civil rights officer in Mississippi.  Cash was the deputy forest supervisor at the Rogue River-Siskiyou National Forest in southern Oregon before transferring to Boston.  Earlier this year, Cash served as the deputy regional director and chief of staff in the Northeast Regional Office.

Cash holds a bachelor’s of science degree in biology from the University of Arkansas at Pine Bluff, and later attended Oregon State University to study wildlife management.

Cash, his wife, Vonda, and their youngest daughter plan to reside in the Gatlinburg area. Their oldest daughter is attending school in Colorado.