The National Audubon Society is inviting birdwatchers to participate in the longest-running citizen science survey in the world, the annual Audubon Christmas Bird Count (CBC). Beginning Sunday, Dec. 14, hundreds of birders and nature enthusiasts across North Carolina will take part in this long-standing tradition where data collected has helped to shape influential conservation efforts nationwide. 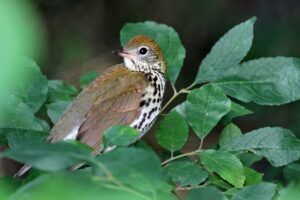 Wood Thrush (Photo by Will Stuart)

As North Carolina’s landscape continues to evolve with changes in climate, habitat and food resources, the data collected during the annual Christmas Bird Count is crucial to understanding the health of native and migrating bird populations throughout North Carolina. During the 2013 CBC, five Snowy Owls were spotted from Asheville to Wilmington, and local citizen scientists were on hand to detail the rare event. North Carolina’s birding circles are some of the top performing in the country, and last year, a record 51 counts across the state reported 1,113,012 individual birds from 225 species.

“In a state where inspiring conservation action is vital to the health of birds facing the damaging effects of climate change, Audubon North Carolina is excited to be a leader in statewide conservation efforts,” said Heather Hahn, executive director.  “As climate change continues to affect populations of the Brown-headed Nuthatch, American Oystercatcher, Wood Thrush and many more iconic species, the data collected during this annual event becomes even more important to ongoing efforts to protect our birds.”

Birders of all ages are welcome to contribute to this nationwide citizen science project, which provides ornithologists with a crucial snapshot of our native bird populations during the winter months. Each individual count is performed in a count circle with a diameter of 15 miles. At least ten volunteers, including a compiler to coordinate the process, count in each circle. The volunteers break up into small parties and follow assigned routes, which change little from year to year, counting every bird they see. In most count circles, some people also watch feeders instead of following routes.