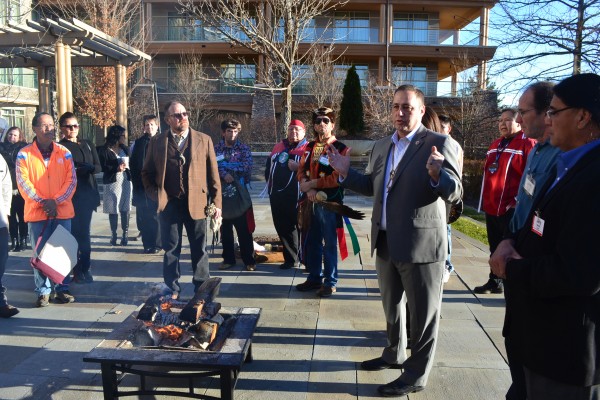 VERONA, NY – The United South and Eastern Tribes, Inc. (USET) 2014 Annual Meeting and Expo kicked off on Tuesday, Dec. 2 in Verona, New York, the home of the Oneida Indian Nation.  Tribal leadership from the 26 member Tribes of USET are meeting this week at Turning Stone Resort.

Welcoming remarks were given by Oneida Indian Nation Representative Ray Halbritter who commented, “Shekoli.  On behalf of the Oneida Indian Nation, I proudly welcome you to USET’s Annual Meeting and Expo.  USET’s legacy has grown from its fledgling four members in 1968 to a burgeoning 26-member organization.  Over the intervening years, USET has helped to strengthen Indian Country through its advocacy efforts on Capitol Hill to its fight against diabetes.  USET has helped to ensure that our voices are heard on important issues we all face.”

USET President Brian Patterson asked Tribal leaders to allow the fire to be an icon for the meeting.  “We are here to honor our relations to our ancestors, to each other, and especially those next generations to come.  Let the fire remind us of our sacred responsibilities we hold for our people and our nations.  While the fire burns here in the land of Oneida Indian Nation, this week fuel the fire inside ourselves to advance our efforts to rebuild our Tribal nations.”