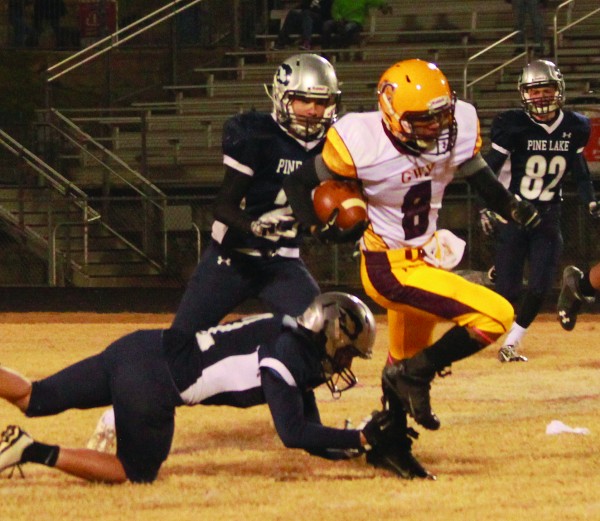 HUNTERSVILLE – It was a tough loss for the Braves, who traveled to North Mecklenburg High School for the 1st round of the NCHSAA playoffs against the hosting Pine Lake Prep Pride who topped Cherokee 38-21 on Friday, Nov. 14.  The contest was held at the North Mecklenburg High School due to the lack of facilities available at the Pine Lake Prep site.

The Cherokee faithful brought a small, but noisy crowd on the cold, blustery night where temperatures were in the high 20’s and the wind chill took it down in the teens.

The Braves opened the game with a strong defensive stand when Cherokee’s Matthew Lee recovered a fumble on the second play from scrimmage.  The Braves opened up shop at the Pride 42-yard line.  A few plays later, senior running back J.J. Benjamin trotted into the end zone to put the Braves up 7-0 after a Steven Swayney extra-point. 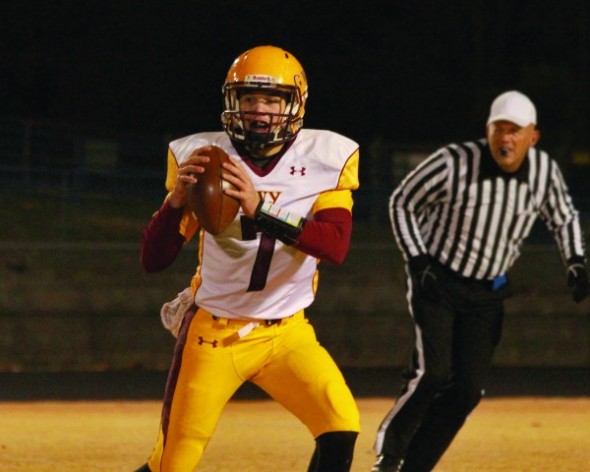 After another stout defensive stand, the Braves took over about mid-field.  A few plays into the drive, Mintz connected with Dustin Johnson on a 37-yard touchdown pass to put the Braves ahead 13-0 at the 5:34 mark in the first quarter.  The point after by Steven Swayney was no good.

Pine Lake Prep Pride was able to develop a scoring drive on their next possession when Austin Cook scored on a 3-yard gallop to put the Pride on the board.  However, controversy struck when Byron Locust and Channing Lossiah of the Braves stopped Austin Cook in the backfield but Cook pitched the ball from his back to a teammate who was able to run into the end zone for the two-point conversion.  The conversion counted and Cherokee led 13-8.

Going into the second quarter, the defense for both teams tightened up.  After a few exchanges of possessions, Cherokee was able to find the end zone again when Mintz hit Jason McMillan on a 58-yard bomb.  A pass to Keenan Panther was good for two-points and would extend the Braves lead to 21-8.

Austin Cook of the Pride would cross the goal line again with 54-seconds in the second quarter.  A two-point conversion run by Cook would close the gap as the Braves took a 21-16 lead into half-time.

Unfortunately, the Braves wouldn’t cross the goal line in the second-half of the game as the Pride scored 22 unanswered points.  The scoring summary was as follows:

The Braves finished their promising season at 3-9 but have plenty to build on in the upcoming years.

After the game, Coach Kent Briggs said, “The seniors fought hard this year to turn this program around.  We’re sad to see them go, but we know football will help them in their life experience and that is what this game is all about.  We are very disappointed in the way we finished.  We had an opportunity and the guys were fighting hard.  We just didn’t get it done.  Hopefully, these will be things we can improve on in the upcoming year and get better on the years down the road.”

To view and purchase photos from this game, visit https://onefeather.smugmug.com/SPORTS/FOOTBALL/FOOTBALL-2014-Cherokee-at-Pine/