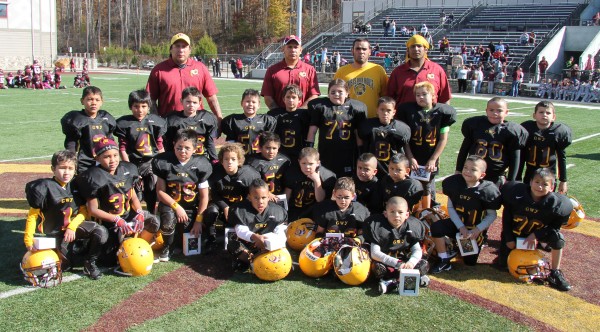 What a difference a week makes!  The 2014 Cracker Bowl, postponed from last weekend due to snow and ice, was played on a beautiful, sunny day at Ray Kinsland Stadium on Saturday, Nov. 8.  The Pee Wee Braves were the runner-up in their division to the Robbinsville Pee Wee Black Knights who edged Cherokee 6-0 in a defensive struggle.

“We’ve come a long way from the first practice to now,” said Brian Thompson, Pee Wee Braves head coach.  “These guys have improved a whole lot, and I’m proud of each and every one of them.  It’s unbelievable how much they’ve improved.  This was the first year for some of them.  I’m looking forward to next year and getting back in this championship game.”

Javon Garcia (#6), Pee Wee Braves running back, breaks a tackle and scoots up the right sideline on a 74-yard run in the fourth quarter that would have been the game-tying score, but a holding penalty negated the play.

Robbinsville scored on their first possession, a 10-play drive that ate up almost seven minutes on the clock and culminated in a 15-yard touchdown run by Isaac Collins. The two-point conversion failed and the Black Knights led 6-0 with 1:42 left in the first quarter.

Both defenses tightened up and the rest of the half was a series of punts.  The third quarter was much the same with both teams having drives that stalled and resulted in punts.

Following a Robbinsville punt, Cherokee started from their own 26-yard line with just over four minutes left in the game.  On first down, Javon Garcia, Pee Wee Braves running back, broke several tackles and ran the ball 74 yards down the right sideline into the end zone for the apparent game-tying score.  But, a holding penalty negated the score.

Cherokee was unable to move the ball following the penalty and turned the ball over on downs with just over a minute remaining in the contest.  Robbinsville simply ran out the clock to take their second consecutive Cracker Bowl Championship.

To view or purchase photos from this event, visit https://onefeather.smugmug.com/SPORTS/FOOTBALL/FOOTBALL-2014-Cracker-Bowl/i-nWXgHvJ