ROBBINSVILLE – Junaluska Memorial Site and Museum will host the annual Junaluska Wreath Laying Ceremony on Friday, Nov. 7 at 11:30 a.m. This year marks the 104th anniversary of the commemoration of the Junaluska gravesite monument.

Junaluska gained fame for his participation in the Battle of Horseshoe Bend. It was there that the Cherokee Nation assisted Andrew Jackson’s Tennessee forces in the defeat of the Creek Nation in 1814. Junaluska is credited for recruiting 100 Cherokee warriors from North Carolina for the American cause. 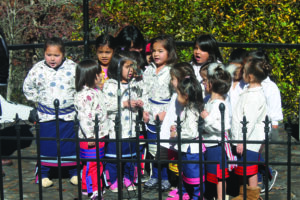 During the removal of 1838, Junaluska departed with a detachment led by the Reverend Jesse Bushyhead on Sept. 3, 1838, on the infamous Trail of Tears.  Several weeks later, Junaluska and Wachacha led a group of 50 others who deserted their detachment and attempted to return to their homes.  Junaluska led a group of 25 older people while his little brother led a younger group of 25.  Junaluska’s group was captured just north of Knoxville, Tenn., and he was taken to Indian Territory under military escort.

A couple years later, Junaluska made his way back to North Carolina, and returned to his home place along Valley River. The state of North Carolina granted Junaluska 337 acres of land in 1847. A large portion of his land is now a part of the present day town of Robbinsville.

Junaluska passed away on Nov. 20, 1858.  He was buried on the land granted to him, along with his third wife Nicie.  In 1910, the General Joseph Winston Chapter of the Daughters of the American Revolution placed a monument at his gravesite. This property was donated to the EBCI in 1998, when the Friends of Junaluska assumed responsibility for the memorial site and museum. In 2001, the then-EBCI Cultural Resources Office (now the Kituwah Preservation and Education Program) began managing the site.

This years’ guest speaker is Warren Dupree, Staff Sergeant U.S. Army Retired.   He is with the Steve Youngdeer American Legion Post 143 which will act as the color guard for this year’s event.

Lunch will be provided after the event.