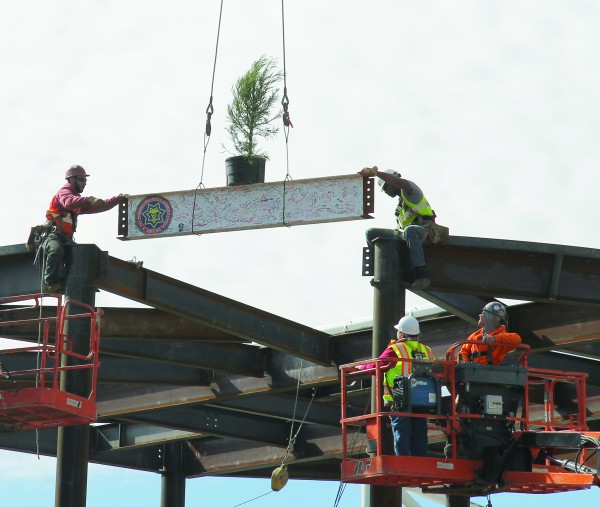 The final piece of steel is set in place during a topping-off ceremony for the new Cherokee Indian Hospital building on Friday, Oct. 24. In the bucket at right are Carmaleta Monteith, Cherokee Indian Hospital Authority Governing Board chairperson, and Principal Chief Michell Hicks who helped put in the final beam. (SCOTT MCKIE B.P./One Feather photos)

In a construction tradition dating back hundreds of years, an evergreen tree was attached to the final steel beam of the new Cherokee Indian Hospital building, and it was lifted into place during a topping-out ceremony on Friday, Oct. 24.  Principal Chief Michell Hicks and Carmaleta Monteith, Cherokee Indian Hospital Authority Governing Board chairperson, helped attach the beam.

“It’s hard to believe that just seven months ago, we stood on top of the mountain here and broke ground,” said Casey Cooper, Cherokee Indian Hospital CEO.  “Seven months ago, we talked about the importance and the value of seeds versus bouquets.  We talked about how it was usual and customary for this community and this Tribe and our tribal leadership to value the sowing of seeds more than the reaping and the cutting of flowers.  Standing around us is the result of the seeds that we sowed more than seven months ago.”

Cooper thanked tribal leadership, the construction team and especially the workers at the site.  “I understand that is usual and customary that the topping-off ceremony is an opportunity where we not only celebrate a milestone in the construction, but we celebrate the iron workers who put themselves at risk every day to erect the steel that makes the structure possible.”

“As you can see, it has been an extremely busy seven months.  This has been the most incredible team that I’ve ever seen and participated with.” 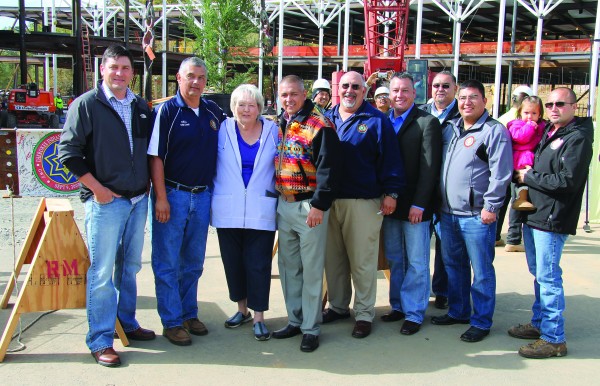 “We’re not here by chance, and we’re not here by luck this morning,” he commented.  “We’re here because we’re a blessed Tribe.  This project is just not going up because we had some extra resources or that we wanted to build a new building.  This Tribe has focused on a number of issues and health is a major priority.”

Chief Hicks continued, “We know the old hospital has served a lot of people over time, but it has become inefficient.  The technology is not where it needs to be, and, so as we began this endeavor on the new hospital, those things were out front.”

“I just want to commend anyone who has had a hand in this particular building because it’s not just a building.  It represents the future of our Tribe, and it will give us the opportunity to be a more healthy people than we’ve ever been before.”

He added, “Casey (Cooper) told me after we were selected that he could have selected 10 other contractors that could have built this job on time, safely, under budget, and a high quality project, but he trusted in us to embrace the community and the Eastern Band of Cherokee Indians to build this project and take it to a new level….it’s been a pleasure for us and our families to be able to come here and do this.”

The new 140,000 square foot facility is being built adjacent to the current hospital and is expected to open in January 2016.

To view and purchase photos from this event, visit https://onefeather.smugmug.com/2014-Community-and-News-Events/Cherokee-Indian-Hospital/i-MqCcvdp