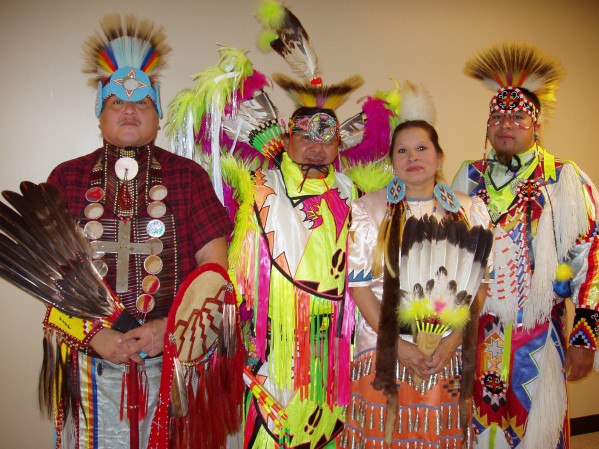 Swain County Schools celebrated Native American heritage and culture by having school assemblies at Swain County Center for the Arts for the high school and middle school last month and for the elementary schools on Tuesday, Oct. 21.  The five assemblies featured Daniel Tramper and the Deer Clan Dancers, all EBCI tribal members, performing a variety of pow wow style dances.  These assemblies received support from the North Carolina Arts Council, a division of the Department of Cultural Resources.

Dancers included Daniel Tramper, his wife Teresa Reed and son Scrappy Sherrill.  They performed both northern and southern plains style dances while John Grant Jr. or Ricky Joe Taylor gave some of the history of each dance and sang.

In addition to playing the drum for the dancers, John Grant Jr. told a story about instructions from a father to his three sons and how the third son gave the gift of love and compassion and another story about how the woodpecker created the first flute out of a tree limb that was used by a young man to woo his girl.  He also described the difference in the old-style northern songs with no words and the contemporary northern style songs with words.  He sang a northern two-step song and a southern plains song.

At the end of high school and middle school assemblies, several students from the audience were asked to join the dancers on the stage for the Friendship Dance.  At the end of each of the elementary school assemblies, six teachers and six students were invited to the stage to participate in a musical hoop game to the rhythm of Ricky Joe Taylor’s drum.  The storytellers closed with the Cherokee words for “till we meet again” since there is not a word in the Cherokee language for goodbye.

Eugenia is the director of the Swain County Center for the Arts.