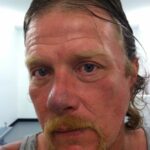 The Cherokee Indian Police Department attempted to serve a US Marshal Warrant for the arrest of Timothy Ray Smith, a 45 year-old, male, for a probation violation on the morning of Thursday, Oct. 23.

When officers arrived on scene to serve the warrant at approximately 7:35am, Smith barricaded himself in a residence on Driver Road in the Big Cove Community.

Smith surrendered himself around 9:13am, shortly after officers arrived with an armored police vehicle. He was taken into custody with no further incident.