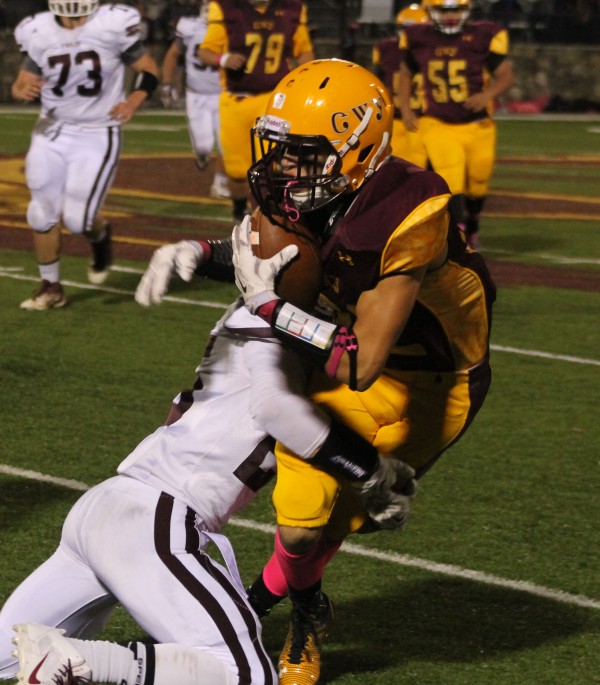 Dustin Johnson (#22), Braves wide receiver, runs hard after catching a pass in the first half of Friday’s game against Swain. He caught a touchdown pass and had an interception in the game. (SCOTT MCKIE B.P./One Feather photos)

The Braves (3-5) fought hard on both sides of the football in their 17-7 loss to Swain on Friday, Oct. 17 at Ray Kinsland Stadium.

Offensively, Cherokee gained a total of 174 yards including 104 passing by quarterback Brandon Buchanan who went 8 for 16 with 1 TD and 2 INTs.  He also carried the ball 12 times for 27 yards.  J.J. Benjamin rushed 7 times for 42 yards.

Logan Teesateskie led the Braves defense with a whopping 21 tackles on the night.  He was followed by WNC-leading tackler Kennan Panther with 15 and and Channing Lossiah with 14.  Dustin Johnson also had an interception for the defense.

Swain got the ball first in the game and started at their own 35-yard line. They drove the ball 65 yards on 13 plays culminating in a 2-yard touchdown run by Spencer McCoy.  The point-after kick by Cooper Reinhart was good and Swain led 7-0 at the 5:19 mark in the first quarter. 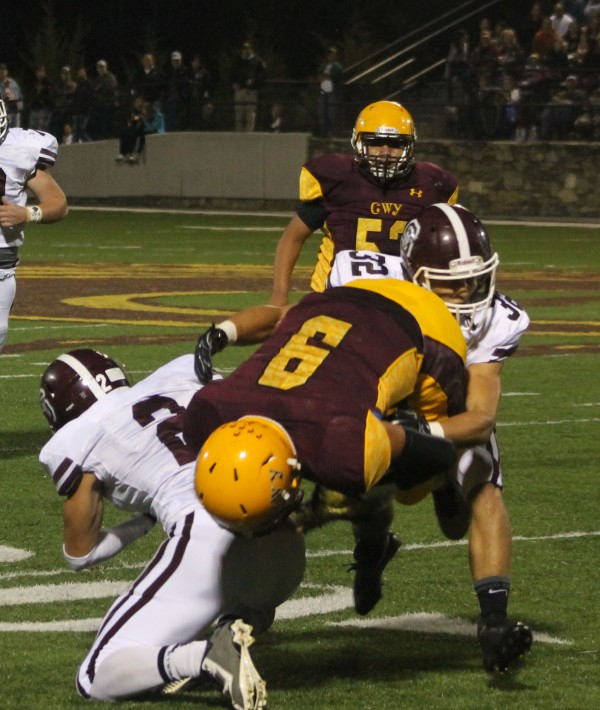 Brandon Buchanan (#9), Braves quarterback dives for a first down in the second half.

The Maroon Devils converted on four third-downs on their opening drive.

Cherokee started their first drive at their own 39-yard line following the kickoff.  On first down, Benjamin took off on a 15-yard run to the Swain 46-yard line.

Several plays later, Buchanan connected with Johnson on a pass complete to the Swain 34-yard line.  Following two penalties on the Maroon Devils and a 5-yard run by Benjamin, the Braves found themselves with a 1st and goal on the Swain 10-yard line.

Cherokee had several incomplete passes in a row and an illegal procedure call that brought up a 4th and goal from the 14-yard line.  Buchanan then hit Johnson in the far back right of the end zone on a 14-yard touchdown pass.  Steven Swayney added the point-after kick and the game was tied 7-7 with just over a minute left in the quarter.

Swain started their next drive in good field position at their own 40-yard line.  They drove the ball 60 yards on 17 plays that culminated in a 32-yard field goal by Reinhart to make it 10-7 midway through the second quarter.

Cherokee would fumble the ball on their next possession, but the defense held tightly and held Swain to a three-and-out forcing a punt.

The Braves then started at their own 32-yard line with just a little over two minutes left in the half.  On first down, Buchanan hit Lossiah on a 30-yard pass to the Swain 38-yard line. 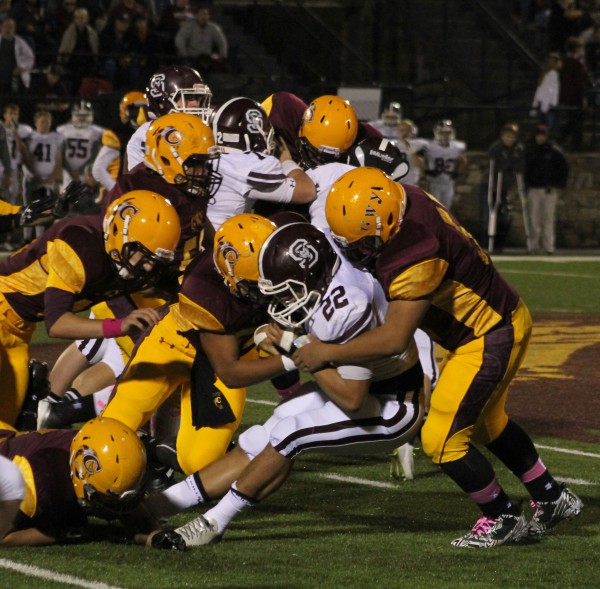 A host of Braves tackle Swain running back Spencer McCoy (#22) in the first half. Logan Teesateskie led the Braves with 21 tackles followed by Kennan Panther with 15.

Several plays later, the Braves faced a 4th and 4 and Buchanan scrambled 7 yards for the first down to the Swain 25-yard line.

On the next play though, Cherokee had a pass intercepted in the end zone to effectively end the first half.

Cherokee was set to receive the ball for the second half, but a mishandled kickoff gave Swain the ball at the Braves 36-yard line.

But, the Maroon Devils didn’t have the ball for long as Johnson intercepted a pass in the end zone and returned it to the Cherokee 21-yard line.

Cherokee was able to get two first downs on the drive, but were forced to punt giving Swain the ball at their own 17-yard line.  The Maroon Devils then drove 83 yards on 14 plays which culminated in a 12-yard touchdown run by Chris Miller.  Reinhart added the point-after kick and Swain led 17-7 at the beginning of the fourth quarter.

Cherokee had to punt on their next possession and Swain turned the ball over on downs on their next time with the ball.  The Braves started out at their own 27-yard line with just over five minutes left in the game.

They got three first downs in a row on pass plays of 16, 10 and 11 yards and found themselves with a 1st and 10 at the Swain 36-yard line.  But, on the next play, the drive ended with an interception at the 8-yard line.

Swain was able to run down the clock following that to take the 17-7 win.

Cherokee travels to Rosman on Friday, Oct. 24 at 7:30pm for another Smoky Mountain Conference match-up.

To view and purchase photos from this game, visit https://onefeather.smugmug.com/SPORTS/FOOTBALL/FOOTBALL-2014-Cherokee-vs/