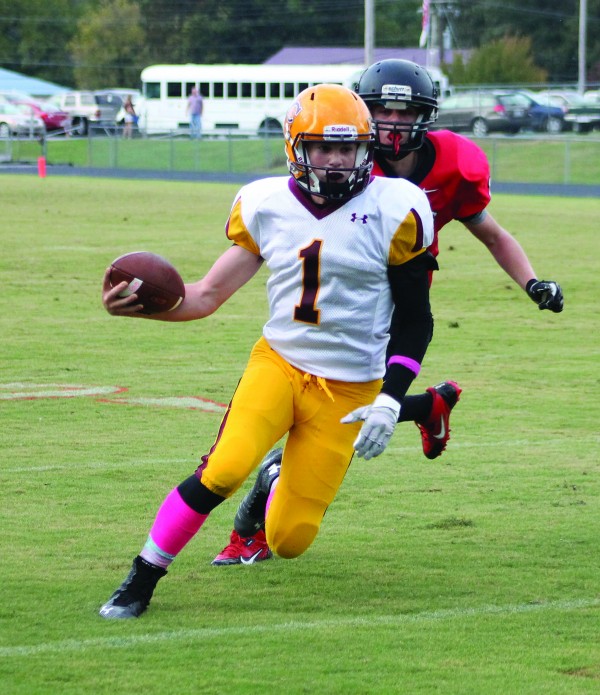 Tye Mintz (#1), JV Braves quarterback, outruns an Andrews defender on a 15-yard touchdown run in the first quarter of a game at Andrews on Thursday, Oct. 9 that Cherokee won 40-16. (SCOTT MCKIE B.P./One Feather)

ANDREWS – The Cherokee fans who braved the driving rain on the drive down to Andrews to watch the JV Braves (5-1) take on the Andrews JV Wildcats on Thursday, Oct. 9 were treated to clear skies, a rainbow and a pot of gold at the end.  Cherokee won the game 40-16 and took second place overall in the Smoky Mountain Conference.

“It’s been a fun year with these guys,” Chris Mintz, JV Braves head coach, said after the game. “These guys have been really exciting to watch.  It’s been fun to watch them grow, and to come from being 0-6 last year and to turn it around and play with confidence has been fun to watch.”

Cherokee got the ball first in the game, but had to punt following a three-and-out.  Andrews started the exact same, and was forced to punt facing a 4th and 12 deep in their own territory.

Evans received the punt for Cherokee at the Andrews 40-yard line and returned it to the 15-yard line.  On first down, Tye Mintz ran it in from 15 yards for the first score of the game.  Evans ran for the two-point conversion and Cherokee led 8-0 midway through the first quarter. 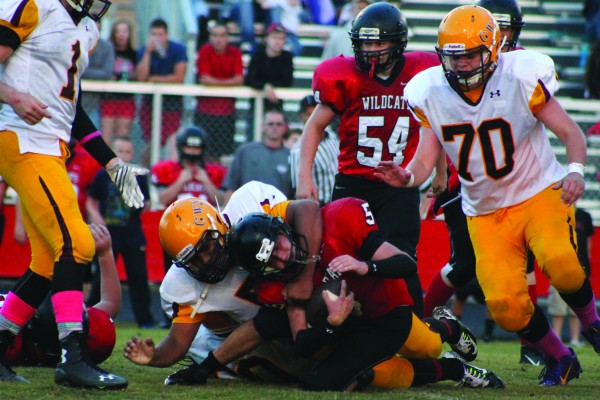 Zak Perez (#52) pummels an Andrews running back. Cherokee’s defense held strong all game long holding the Wildcats to only 16 points.

The Wildcats started their next possession at their own 43-yard line and Cherokee’s defense held tight again.  Following a sack on third down by Cherokee’s Damian Blanton, the Wildcats were forced to punt again.

Tye Mintz received the ball at his own 30-yard line and returned it 70 yards for a touchdown.  The two-point conversion failed and Cherokee led 14-0 with four minutes left in the first quarter.

Andrews was unable to move the ball again and were forced to punt following another three-and-out.  Cherokee was flagged for a personal foul on the punt return and started deep in their own territory on their own 7-yard line.

That didn’t phase them one bit though.  On first down, Tye Mintz connected with Evans on a 93-yard bomb for the third score of the quarter.  The two-point failed and Cherokee led 20-0 with 1:31 left in the first. 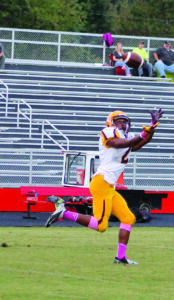 Isaiah Evans (#2), JV Braves running back, runs under a Tye Mintz bomb for a 93-yard touchdown pass in the first quarter.

Andrews started their next possession at their own 35-yard line and put together a seven play drive that culminated in an 8-yard touchdown pass.  The two-point was good and Cherokee led 20-8 at the 8:17 mark of the second quarter.

Cherokee threw an interception on their next possession, but the Wildcats would only have the ball for one play as Holden Straughan, JV Braves cornerback, intercepted the ball at the Cherokee 34-yard line.

The Braves were unable to move the ball though and had to punt.  Andrews turned the ball over on downs on their next possession, and Cherokee took over at their own 46-yard line with just under two minutes left in the half.

On first down, Evans cut through the Wildcats defense and took it 54 yards to the house.  The two-point play failed and Cherokee took a 26-8 lead into halftime.

Andrews got the ball first in the second half, but turned it over on downs at their own 49-yard line.  On first down, Tye Mintz connected with Straughan on a pass to the Andrews 36-yard line.  Several plays later, the Braves found themselves with a 1st and 10 at the Andrews 15.

Tye Mintz ran for what seemed to be a touchdown on first down, but a holding penalty said otherwise.  Several plays later, Cherokee would find the end zone though as Tye Mintz threw to a wide-open Wesley Wildcatt for a 9-yard touchdown.  Wildcatt also caught the two-point conversion to make it 34-8 midway through the third quarter.

Cherokee would get back into the end zone very quickly.  Andrews started their next possession at their own 43-yard line, and Tye Mintz would intercept a pass at the 45 and run it all the way back for a touchdown.  The two-point failed and Cherokee led 40-8 with 4:41 left in the third.

Andrews would add a score late to make it 40-16, but it was too late as Cherokee took the win.

See you next season!

To view or purchase photos from this game, visit http://onefeather.smugmug.com/SPORTS/FOOTBALL/JV-FOOTBALL-2014-Cherokee-at/