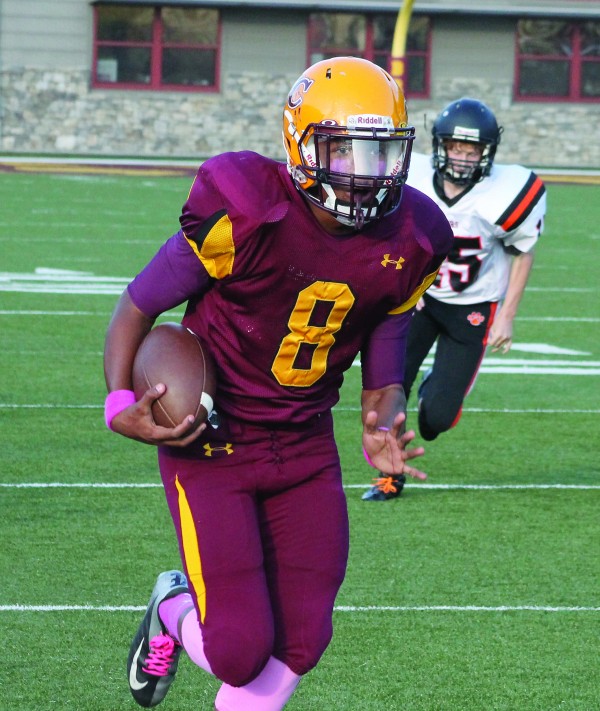 After picking up a Rosman fumble, Cherokee’s Isaiah Evans (#8) runs 40 yards for a touchdown just minutes into the game against Rosman at home on Thursday, Oct. 2. (SCOTT MCKIE B.P./One Feather photos)

Cherokee’s defense held the Tigers scoreless until just before halftime and recovered four Tiger fumbles as Cherokee (4-1) dominated Rosman 48-20 at Ray Kinsland Stadium on Thursday, Oct. 2.   Tye Mintz, JV Braves quarterback, led the Cherokee offense as he ran for three touchdowns and threw for one.  Cherokee’s offensive line also dominated throughout the game opening up gaping, you-can-drive-a-truck-through-them holes for the Braves running backs.

“It wasn’t the prettiest thing in the world, but we made some nice plays, got a big lead and were able to play everybody,” said Chris Mintz, JV Braves head coach.  “It made for a pretty fun night.”

Cherokee jumped out early in this game.  Rosman received the ball first and started their first drive at their own 38-yard line.  The Braves defense held strong and forced a 4th and 3 from the Rosman 45-yard line.  A Rosman running back fumbled the ball which was picked up by Cherokee’s Isaiah Evans who returned it 40 yards for a score.  The two-point conversion failed and Cherokee led 6-0 less than two minutes into the ballgame.

Rosman turned the ball over on downs on their next possession and Cherokee started their next drive at their own 47-yard line.  On third down, Tye Mintz ran 34 yards for a first down to the Rosman 28-yard line.  Then, Isaiah Evans ran 19 yards to the Rosman 9-yard line.  Two plays later, Tye Mintz connected with George Swayney on a 9-yard touchdown pass.  The two-point conversion was no good and Cherokee led 12-0 at 1:41 left in the first quarter.

The Tigers wouldn’t keep the ball long on their next possession.  After starting at their own 21-yard line following the kickoff, Rosman fumbled the ball which was recovered by Cherokee’s Damian Blanton at the Rosman 20-yard line. 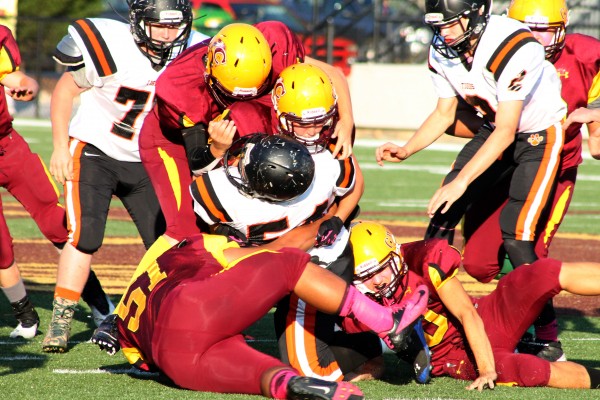 A host of Braves envelope a Rosman running back. Cherokee’s defense held the Tigers scoreless until just before halftime and recovered four Tiger fumbles.

Three plays later, Tye Mintz found the end zone on a 13-yard touchdown run.  The two-point failed and Cherokee led 18-0 at the 1:02 mark in the first.

Rosman didn’t keep the ball long on their next possession either as they fumbled the ball on the third play of their drive.  The fumble was recovered by Cherokee’s Wesley Wildcatt at the Braves 23-yard line.

On the first play of the drive, Isaiah Evans found the corner on the right side and beat the Rosman defenders as he ran 77 yards for an apparent touchdown…but, it was not to be as the play was called back for a chop block.

The Braves didn’t let that bother them much as two plays later, Tye Mintz found the corner on the right side and beat the Rosman defenders as he ran 88 yards for a touchdown.  Swayney caught a Tye Mintz pass for the two-point conversion and Cherokee extended its lead to 26-0 at the 9:12 mark of the second quarter.

The Tigers turned the ball over on downs on their next possession and Cherokee threw an interception when they got the ball back.

Rosman took over at their own 26-yard line following the pick and put together a six-play drive that culminated in a 19-yard run by Thomas (#2).  The two-point try failed and Cherokee led 26-6 with two minutes left before the half. 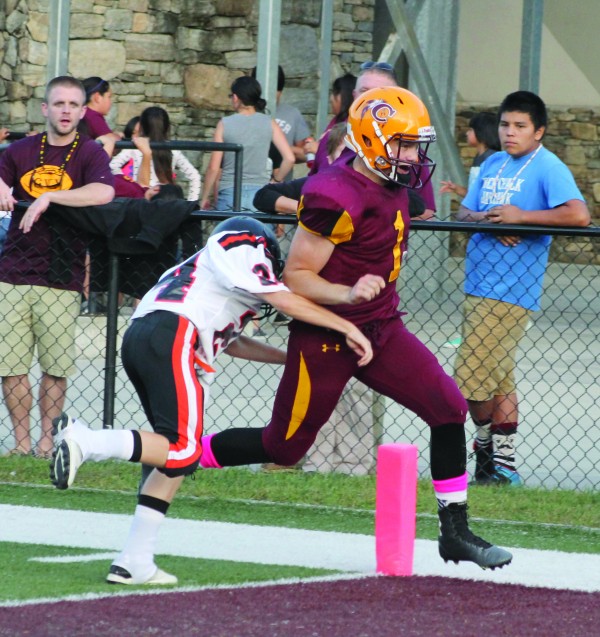 Tye Mintz (#1), Braves quarterback, runs for a 13-yard touchdown in the first quarter. Overall, he ran for three touchdowns and threw for one.

Following a personal foul call against Rosman, Cherokee started their next drive from the Tigers 42-yard line.  On the first play of the drive, Tye Mintz ran 42 yards for the score.  Blanton ran for the two-point conversion and Cherokee took a 34-6 lead into the locker room.

Dressed in pink shirts in observation of Breast Cancer Awareness Month, the JV Cheerleaders performed at halftime.  The JV Braves also wore pink socks during the game to show their support.

Cherokee got the ball first in the second half and started their drive in good field position at their own 49-yard line.  An illegal procedure penalty backed the ball up to the 44-yard line and on second down, Tye Mintz ran 48 yards to the Rosman 8-yard line.

Several penalties (on both sides) and several plays later, Nate Evans followed a slew of Cherokee blockers around the right side into the end zone on a 10-yard touchdown run.  Sterling Santa-Maria caught a Tye Mintz pass in the end zone for the two-point conversion and Cherokee led 42-6 with seven minutes left in the third.

Rosman turned the ball over on downs again and Cherokee took over on the Rosman 36-yard line.  On the first play, Blanton ran 36 yards for a score.  The point-after kick failed and Cherokee led 48-6 at the 5:08 mark in the third quarter.

Due to Cherokee’s big lead, the referees ran the clock continually from this point on.  Rosman would add two more scores as Shook (#44) ran for a 14-yard touchdown at 3:02 in the third and Stanley Sutton (#83) ran for a 46-yard touchdown with 4:48 left in the game.

Rosman did get the ball back one more time, but that drive ended with a minute left in the game as they fumbled and the ball was recovered by Cherokee’s Ietan Reed-Littlejohn.

The JV Braves will finish their 2014 season at Andrews on Thursday, Oct. 9 at 6pm.

Coach Mintz commented that it is a big game for the JV Braves, “We still have a chance that if Swain were to beat Murphy, we’d tie for the conference title.  So, it’s (Andrews) a very important game.  It’s our last game of the year, so we’re going to be excited for it.”

To view and purchase photos from this game, visit https://onefeather.smugmug.com/SPORTS/FOOTBALL/JV-FOOTBALL-2014-Cherokee-vs/i-cdSXmqN