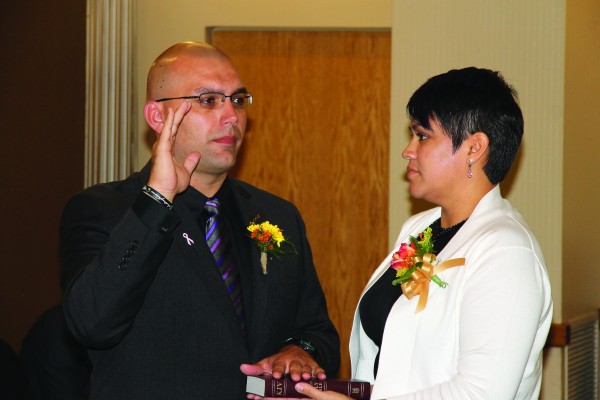 As his wife, Michelle, holds the Bible, Skooter McCoy takes the Oath of Office to become the third general manager of the Cherokee Boys Club during a ceremony at the Chestnut Tree Inn on the morning of Wednesday, Oct. 1. (SCOTT MCKIE B.P./One Feather photos)

Skooter McCoy was sworn in as the third general manager in the history of the Cherokee Boys Club (CBC) during a breakfast ceremony at the Chestnut Tree Inn on Wednesday, Oct. 1.  The new CBC Board of Directors was also installed for a two-year term.

“It’s a beautiful morning for me and my family,” said McCoy who related that his first paycheck came from the CBC when he was 14 and worked for a summer in the JTPA program.  “My family and I have been truly blessed.  It is vital to remember the values and work ethic that got us here today.”

McCoy said there will be many challenges going forward, but he related, “I am confident that our future is bright.  Our strong faith and determination will see us through.”

Saying the CBC will continue to work every day under its motto “By Prayer and By Work”, McCoy said, “We will continue to drive and take this organization into the future.  I cannot begin to express my  level of commitment to this position.  It is truly an honor.” 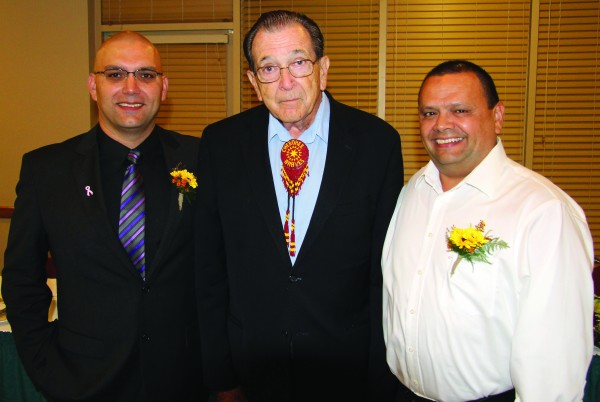 Skooter McCoy (left) was sworn in on Wednesday, Oct. 1 as the third general manager in the history of the Cherokee Boys Club during an event held at the Chestnut Tree Inn. He is shown with Ray Kinsland and Tommy Lambert, the first and second general managers respectively.

Jason McMillan, Cherokee High School sophomore, takes the oath of office as the new student representative on the Cherokee Boys Club Board of Directors.

“The Boys Club will give an opportunity to anyone in this community when a lot of other organizations won’t give them an opportunity.”

He said the CBC was great in giving him opportunities and helping build confidence throughout his career.  “Four years ago, they gave me the ultimate compliment by being the second general manager of the Boys Club in the past 50 years.”

To view and purchase photos from this event, visit https://onefeather.smugmug.com/2014-Community-and-News-Events/Cherokee-Boys-Club/i-JHMBD92