Their work has resulted in the creation of new words and the revival of older, less commonly used words.  Their work impacts the Cherokee Nation and Eastern Band’s immersion programs, as much of the work is academic.  Like all languages, Cherokee has evolved over time.  While there are some who may question the creation of new words, it is logical.  As explained by some of the Cherokee speakers, the environment has changed and new things have been introduced.  Until the past eight years, no official method of evolving the language to thrive in the 21st century existed.

He added, “I don’t think we will ever finish what we have started.  It is an ongoing process. It is very important.”

Attendees work in sessions at the Cherokee Language Consortium at the New Kituwah Academy on Wednesday, June 25. (Photos courtesy of Renissa McLaughlin/KPEP)

The decision to meet as a formal group was decided upon during a Language Revitalization Symposium in 2004.  The speakers present met informally following the afternoon session.  It was decided in that quiet circle of reunited Cherokee speakers from all three sister tribes to work together to save the language.  The following year, legislation was passed in Joint Council between the Cherokee Nation and the Eastern Band which formalized the efforts of the tribes and their sister universities, Western Carolina University and Northeastern State University.

For the past 10 years, the tribes have shared information and worked together.  The Cherokee speakers who gather come from various backgrounds and communities.

The group is joined by supporters and organizers, such as Dr. Hartwell Frances of WCU who related, “My role is organizational and support.  These meetings are very important for our course work.”

The closing prayer for the first day of this year’s Consortium was given by the Reverend Bo Parris who spoke about his travels to and from Cherokee during his youth.  In high school, he stayed with Mose Owle in Birdtown.  And, while attending Carson Newman, he traveled across the mountain and pastored in Yellowhill staying with Tom and Mandy jumper.  He also spent time with Jim and Ella west.

In 1959, he and his wife Ella, who was a Cherokee speaker, moved to Big Cove, where he pastored until retirement.  As a participant and honored guest, he remarked about the meetings, “I like it.  I think it is good and useful.”  The Reverend Parris is well known and liked in the Cherokee community and to his credit has become proficient in the Cherokee language.

Micah Swimmer, who is the early childhood supervisor at New Kituwah Academy and an immersion parent, had the opportunity to drop into the session on the first day.  When asked about his experience, he stated, “It was amazing!  I loved hearing all the speakers speak the language.  It is a different environment in there with them, and I look forward to attending more.” 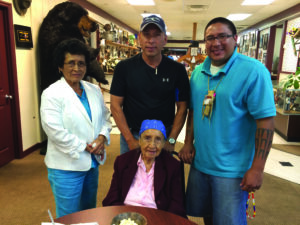 He was able to join his grandmother, Amanda Swimmer, during the Consortium luncheon.

Garfield Long, who is also an employee with the Kituwah Preservation & Education Program stated, “It was a good day for learning new words and experiences.  If we continue to do this, we will accomplish a lot more in the future.”

Anna Sixkiller, Cherokee Nation, commented on their first day, “Very important, it is important that we create, for the generations to come in the schools, immersion especially.  We will continue to work diligently.”

The Consortium members from all three tribes currently meet four times a year.  All of the participants are volunteers with the exception of organizers.  The Cherokee speakers who travel to the meetings do so with honor and despite some of their ailments, are resilient.  It is a rare and wonderful thing to witness the reuniting of the tribes for a common goal.  The meetings are sponsored by the sister tribes and funding in part through a grant from the Cherokee Preservation Foundation.

If you are Cherokee speaker and are interested in learning more about the Consortium, please contact the Kituwah Preservation & Education Program 554-6401.  Everyone is welcome.