A group of students from Illinois State University spent the past month learning about historic Cherokee towns.  The students, participants in the university’s Archaeological Field School, studied Cherokee towns and mounds such as Cowee and presented their findings to the Cherokee community on Wednesday, June 25 at the Yellowhill Community Building.

The four-week field school was co-sponsored by the university and the EBCI Tribal Historic Preservation Office.  Students learned about research, surveying, excavation, analysis, curation, and mapping. 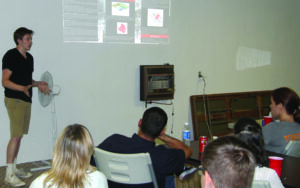 Brad Byrne, an Illinois State University student and participant in the Archaeological Field School, presents his findings on evidence of Cherokee ballgames at Cowee during a community presentation at the Yellowhill Community Building on Wednesday, June 25. (SCOTT MCKIE B.P./One Feather)

Brad Byrne researched evidence of Cherokee ballgames at Cowee.  “They (ballgames) would need to be located somewhere near a river so that the pre-game ceremonies could be performed.”

In his research, he studied soil conductivity and mapping and elevation.  “I suggested it was on the lower field based on the data that we have so far.”

Garrett Marta researched the orientations of Cherokee towns to rivers and mounds.  “At both Nikwasi and Nvnvnyi, both of the mounds are located at the bottom of a valley, but the mound at Cowee is located at a hilltop.”

He determined the orientation and distance to the river is different at each site but that all three sites are located in the fork in a river.  “There seems to be an emphasis on placing the towns within the interior of a river.”

Theartis Butler studied temper – an additive to raw clay that helps pottery from cracking during firing – at the Nvnvnyi site.  “What can temper tell us about people of the past?  Well, maybe it can tell us about trade.” 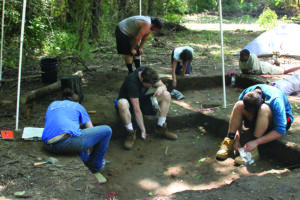 Butler studied a 321-sample of grit, shell, sand, limestone and sandstone from Qualla phase pottery and determined that 75 percent of the temper found was grit followed by sand and soapstone.  “Most of the temper was made from grit, and that was local.  So, that means they weren’t getting it from anywhere else.”

Erin Randolph researched shale and its use as gaming pieces, burnishes, and rattle pellets.  “The rattle pellets were the most commonly found because it takes a lot to make a rattle.”

The field school program was funded in part by a grant from the Cherokee Preservation Foundation.  Annette S. Clapsaddle, CPF executive director, noted that the program is very much in line with their cultural preservation goals.  “We are encouraged to see such positive partnerships focused on the recovery of historical cultural knowledge and the sharing of this knowledge with future generations.”