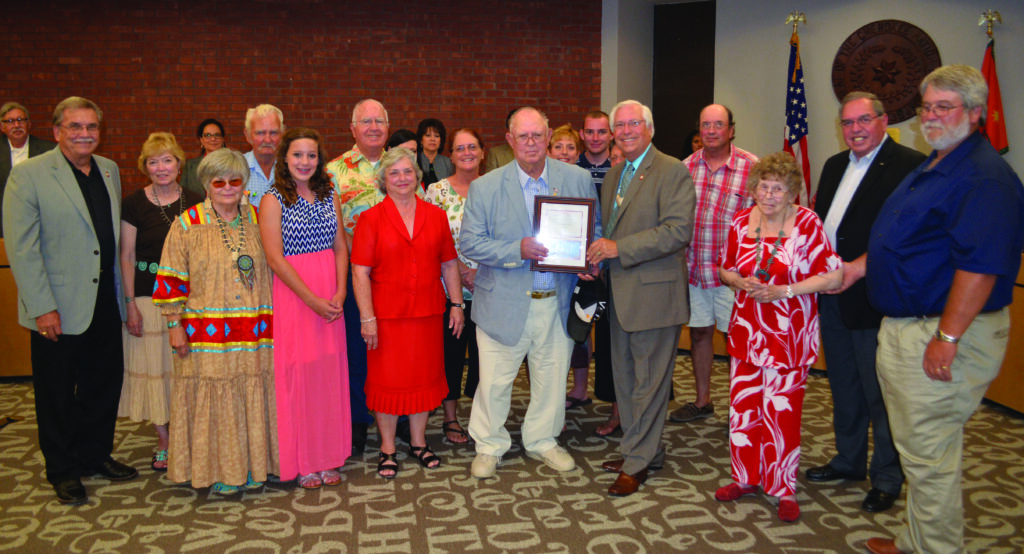 Seaman Gilmore was born Oct. 2, 1929, to Donald Bruce and Carolyn Elizabeth Johnson Gilmore, in Davenport, Oklahoma. In 1947, Gilmore enlisted in the U.S. Navy and completed basic training in San Diego. After basic training, he was assigned to the USS Hollister and trained for gun fire control. Gilmore received an honorable discharge in 1951 and was awarded the Korean Service Medal, Good Conduct Medal and more. After his service, Gilmore became an electrician working mainly in the oil fields of Taft, California. In 1969, he and his wife, Linda, moved their family to McMinnville, Tennessee, where he currently lives.

“I’m proud to be a Cherokee, and I am proud to have served our country and God, and the Cherokee Nation,” Gilmore said.

Pfc. Woodall was born March 16, 1916, to Ira Coon Woodall and Grace Bell Dotric, near Welch. Woodall helped his father haul coal by wagon from west of Welch to Pitcher before joining the U.S. Army. While serving in Italy during World War II, Woodall was killed in action when his company was ambushed by German forces in 1944. German soldiers buried his body in a mass grave, where he remained until the early 1950s. Woodall now lies in a cemetery in Welch. The Craig County Court House has a plaque with the names of all Craig County military killed in World War II, including Woodall’s name.

Spc. Girty was born Feb. 15, 1934, to Tobacco and Jennie Girty, at the Claremore Indian Hospital. Raised on Greenleaf Hill in Tahlequah, Girty was the oldest of six children. He graduated from Tahlequah High School, and then Haskell Institute in Lawrence, Kansas. Following graduation, Girty was drafted into the U.S. Army in 1957. He completed basic training at Fort Carson, Colorado, and then spent eight weeks in clerical school at Fort Knox, Kentucky. Girty worked as a vehicle parts clerk in the motor pool at Fort Lee, Virginia until he received his honorable discharge in 1959. Girty now lives in Lawrence, Kansas, with his wife, Frances, and still serves as a professor at Haskell Indian Nations University part time.

Seaman Apprentice Leathers was born April 14, 1922, to James and Attie Lee Hargis Leathers, in Adair. Leathers dropped out of school to work on the family farm. In 1942, Leathers was drafted into the U.S. Navy, and while waiting to be called up for basic training he worked for B & B Transportation Line in Tulsa. In April 1945, Leathers went to basic training in San Diego and then sent to San Pedro, California, to serve as a mechanic aboard the USS O’Neill. Leathers worked to repair the ship after it suffered damage in combat in Okinawa, Japan. Leathers received an honorable discharge in October 1945. He still lives in Big Cabin near Adair with Ellen, his wife of 40 years.

“I have had people ask me what nationality I am, and I say, well, I’m Cherokee. I’m proud to be Cherokee,” Leathers said.