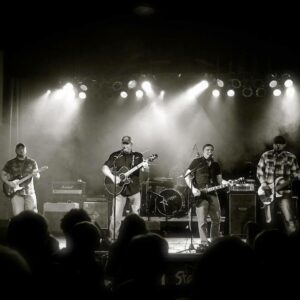 A country roots band from Asheville, The Honeycutters were voted Western North Carolina’s favorite Americana band in the Mountain Xpress reader’s poll in 2011, 2012 and 2013. The musicians sing and perform on mandolin, pedal steel guitar, dobro, guitar, bass and drums.

The final three concerts in the series also will be free and held in the Central Plaza at 7 p.m.

On Tuesday, July 8, the Sylva-based Buchanan Boys will perform a “countrified rock and roll” show that draws from the eclectic tastes in music of the five band members.

Then on Tuesday, July 15, Cullowhee-based Porch 40 will combine elements of Motown, jazz and funk to create a unique sound embellished with rock, progressive, indie, metal, hip-hop and rock.

The series will conclude Tuesday, July 22, with a performance by Unawarewulves of Franklin. The sextet offers a blend of rockabilly, dance, jazz, funk and pop music.