A seven-year project involving 143 hymns has culminated in the Cherokee Hymnbook.  The hymns were derived from a 1830 Cherokee hymnbook that contained only the words in the Cherokee syllabary but no music.

Shirley Oswalt, Jinnie Brown and Mary Brown, all fluent Cherokee speakers from the Snowbird Community, translated the syllabary in the old hymnbook into English.  Dan Dills, of Knoxville, converted the syllabary into phonetics which was put into music and paired with existing modern hymns.

When speaking of the old hymnbook, Dills related, “The tunes were totally lost, and people would just hold the book and sing from memory.  They weren’t really reading the syllabary.”

Some of the people responsible for the new Cherokee Hymnbook pose with the book at an official release event at the Museum of the Cherokee Indian on Friday, June 13. Shown (left-right) are Dan Dills, Shirley Oswalt, Joyce Cooper and Museum executive director Bo Taylor. (SCOTT MCKIE B.P./One Feather photos)

He said there were only 25 of the older songs left.  “They were just words on a page, and we ran out of songs to sing. So, I said, well, I can do that in my spare time, but it took seven years and 3,000 hours.”

Dills added, “Everybody is really pleased with what it’s going to do for the language.”

“Dan Dills put the original syllabary hymns into phonetics and then matched each syllable of the phonetic words with each note of the tunes,” said Barbara Duncan, Museum education director.  “This was a monumental task requiring knowledge of both Cherokee language, music notation, and hymnody.”

“Dan also scanned music for the hymns and placed the phonetic text in the right position with the music note by note in Photoshop.” 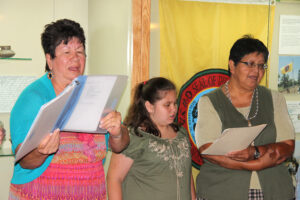 Members of the Snowbird Choir performed at Friday’s event including (left-right) Mary Brown, Jazlyn McEntire and Shirley Oswalt. Brown and Oswalt were two of the translators on the project.

Joyce Cooper, Museum of the Cherokee Indian,  scanned the music a second time and replaced lines of text.

She previously had a 30-year career with the Department of Community Colleges at Haywood Community College where she was the director of the library.  “I’m very proud of working with students and helping them get their education, but as far as one project that I had to choose as a professional, this project with the Hymnbook is the most awesome, inspiring and difficult thing that I’ve done, and I’m so very proud of it.”

“I think this is going to make a difference in the Cherokee Nation, be it Western or Eastern, and I think it’s going to last forever.  To our knowledge, this has never been done…it is just a dramatic, mind-boggling accomplishment.”

Oswalt noted, “That original songbook wasn’t very useful to anybody because the tunes had been lost over time…so, now we can sing to modern tunes, but it worked out.”

“We would like to give credit to our God.”

Bo Taylor, executive director of the Museum of the Cherokee Indian, said he remembered a few years back when he was the archivist at the Museum and Dills came to the Archives and spoke to him about wanting to do the book.  “He was just crazy about it.  When you’re able to find something that you appreciate and love and that you know needs to happen, I have a lot of respect for that.  Dan, I want to say thank you.”

Taylor spoke of the old hymnbook, “That little book was there with our people at Removal, and it got our people through some miserable times.  Our songs need to continue, and with this book, it gives them some solid backbone.”