Jeremy Saunooke, an EBCI tribal member and senior at Swain County High School, signed a letter of intent on Friday, June 13 to play college football this fall at Bacone College in Muscogee, Okla.

Saunooke was a linemen on the Maroon Devils team that made it to the 1-AA Western Regional Championship game this season.

“Not many people get the opportunity to play at the next level so I’m blessed to go,” he said on Friday.  “I’m just looking forward to playing some football and getting started.”

Swain head coach Neil Blankenship commented, “It’s always exciting for them to go to the next level, and the biggest thing I want them to do is to finish and get their degree and be leaders in their community when they come back.  They get a chance to go play a game they love and also get their education.”

“He gets an opportunity to go play and not a lot of kids get that chance so it’s a big compliment to him, and like I told the (Bacone) coach, ‘he’s got a lot of uprise’.  He has such great potential to be a great player for them.  I look forward to hearing about him in the future.” 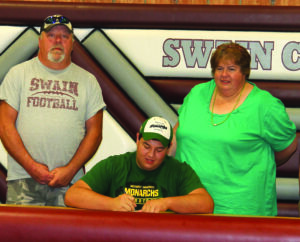 Brent Gunter (seated), whose grandfather, Tim Beck, is an EBCI tribal member, signs a letter of intent on Friday to play college football this fall at Methodist University as his parents Lance and Jilinda Gunter look on.

“I’m very proud of him,” said Joseph Saunooke Jr., Jeremy’s father.  “He’s going somewhere, and I hope he does well.”

Jeremy’s mother, Arlene Squirrel, noted, “I am very proud, and I’m hoping that he’ll accomplish this and do great at it.  I hope that he goes all the way and that he comes back here and will be able to teach younger kids.”

Bacone College is a NAIA school and competes in football in the Central States Football League (CSFL) of which they were 2013 co-champions.