Andrew Conseen Duff, an EBCI tribal member, has been in IT and technical engineering for over 30 years.  He has made numerous contacts at companies throughout the world, and he organized the EBCI Technology Expo to bring representatives of some of those companies to Cherokee to meet with community and tribal leaders. 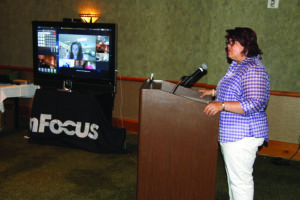 As her remarks are streamed live via a new device known as a Mondopad (left), Chairperson Terri Henry speaks during the opening of the EBCI Technology Expo.

“In working with these companies over the years, producing hundreds of million dollar projects across the United States, I have built a rapport with them in getting them to understand our communities and our needs,” said Duff.   “So, this week, these companies are coming to introduce themselves to Indian Country.”

He added, “It’s not a sales call.  It’s not a demonstration of what the latest mousetrap can do for you.  It’s about ideas and partnership opportunities and the vision of how to take the Tribe from where we are today to where we can be in the future.”

Dick Wilcher, federal business development manager at TE Connectivity, commented, “We are here to introduce our company to people that are probably not very familiar with us.  We want to educate them on what we’re doing.  We’ve worked with Andrew Duff for a long time on a lot of projects throughout the country, and now we want to get more involved with working with the Tribe to find out if there are things we can do to compliment what they’re trying to do.” 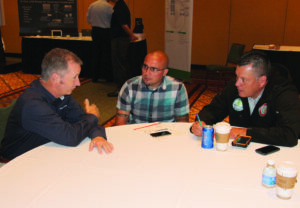 Chairperson Terri Henry spoke at the opening of the Expo on Wednesday, June 11 and said, “The Tribe is partnering with several information technology international corporations to introduce leading-edge technology to the Tribe and its citizens.”

Her opening remarks, as well as welcoming remarks from company representatives, were streamed live via technology from InFocus known as the Mondopad which allows video-conferencing in up to 20 different locations.

“Our corporate visitors will have the opportunity to tour the Tribe and meet with tribal leadership to share ideas and review technology,” said Chairperson Henry who related she believes this is the first Technology Expo of its kind held in Indian Country.  “We thank you for your interest in visiting Cherokee, our Indian Country, and to see what we have to offer.”

She added, “Information technology drives the global economy.  The question you need to ask is, ‘what can the Eastern Band do to be part of the engine that drives the rest of the world?’”