Tribal member is a finalist for prestigious book prize

Herman Melville, author of Moby Dick, once said, “To produce a mighty book, you must choose a mighty theme.”  That is exactly what one EBCI tribal member has done, and it has paid off.

Annette Saunooke Clapsaddle, whose day job is as the executive director of the Cherokee Preservation Foundation, has penned a 270-page novel entitled Going to Water whose main character is loosely based on her grandfather, the late former Principal Chief Osley Saunooke. 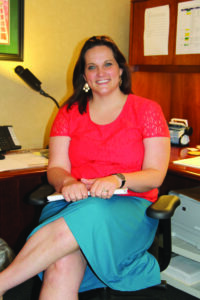 Annette Saunooke Clapsaddle holds the manuscript for her first novel, Going to Water, which is a finalist for the 2014 PEN/Belwether Prize for Socially Engaged Fiction. (SCOTT MCKIE B.P./One Feather)

For that novel, she has been named a finalist for the prestigious PEN/Belwether Prize for Socially Engaged Fiction.  A prize of $25,000, funded solely by prize-winning novelist Barbara Kingsolver, and a publishing contract will go to the winner.

Clapsaddle related this is one of the largest prizes for an unpublished work of fiction, and that the prize is for fiction that addresses social and cultural issues.

“It is a national prize and the process takes several months, lots of waiting,” she said.

There were a total of 170 entries this year, and Clapsaddle’s novel was chosen as a top ten finalist.  The winners will be announced on June 17 at an event in New York City.

“Kingsolver has said the prize is career-launching,” said Clapsaddle.

On her novel, Clapsaddle related, “It is a fictional account that began as a character inspired by my grandfather, Osley Saunooke, who was a former Chief.  But, I was really interested in his character and his identity as a professional wrestler, a Cherokee politician, a businessman, and a family man.”

“So, I used that as a basis for the main character, who is also named Osley, but I changed the last name.  He is born on the Qualla Boundary, and in an effort to find his own identity and to see what options he has, goes to Chicago for a while and gets some experience outside of Cherokee, but then comes back and still tries to balance an authentic identity with the changing world and economy of North Carolina and the nation at the time.”

Clapsaddle began working on the novel over ten years ago, “It was a lot of stop and go.  The final draft was completed within the last year.”

She is now working on a new project.  “I prefer novel length.  It just comes more naturally to me than short stories or poetry.”