BAR HARBOR, Maine – Trust Reform, U.S. Supreme Court and federal court decisions and their impact on Indian Country, Carcieri Fix, youth and education, exploring leverage and partnership opportunities, building stronger Tribal economies, and dealing with climate change are the seven topics the USET Board of Directors will discuss this week at the 2014 Semi-Annual meeting which opened on Monday, June 2.

The format of this meeting, which is being hosted by the Wabanaki Tribes of Maine, is a workshop/round-table discussion of topics to identify challenges and opportunities.  USET leadership has a goal to develop strategies for implementing solutions to overcome identified challenges and explore beneficial opportunities for the organization and its member Tribes.  Several Tribal, federal, and non-profit or non-governmental agencies and organizations are joining the discussions.

Singers render an honor song at the opening of the USET Semi-Annual Meeting in Bar Harbor, Maine on Monday, June 2. (Photos by Brandon Stephens/USET) 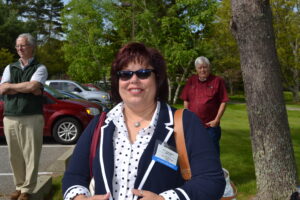 Chairperson Terri Henry, shown at Monday’s opening ceremony, will be honored by USET on Monday night.

In a unified statement, the five Tribal leaders of these nations told attendees, “While we are all aware of the tremendous challenges we face as Indian People from health disparities to our basic rights to restore our homelands, it is our opinion that nothing challenges the future of our Nations more than attacks on our sovereignty and ability to self-govern. The (USET) Semi-Annual Meeting and its structure will allow us a unique opportunity to engage in a council format to find solutions to the issues facing us all.”

Several individuals are being honored during the Semi-Annual Meeting.  In the opening ceremonies, the USET Board of Directors honored retiring Poarch Band of Creek Indians Chairman Buford Rolin. Rolin has been in Tribal leadership for more than fifty years after completing his service in the United States military.  Chairman Rolin has been a strong a valuable advocate for American Indian and Alaska Native healthcare issues and funding.   USET also honored several Wabanaki citizens who are veterans of the United States armed forces.

In the opening ceremonies, USET President Brian Patterson encouraged attendee participation in all activities and high level participation in the seven meaningful discussions scheduled for the week.  “The USET Board of Directors welcomes you to sit on our sacred circle to find answers and build resources.  Thank you for your continued engagement, leadership, and dedication to improving the lives of all Tribal citizens.  I look for many meaningful discussions, productivity, and a time to reconnect.  With the power of a good mind, peace power and righteousness, and with a good heart, our meeting will truly be beneficial to Indian Country,” Patterson said.

The 2014 Semi-Annual meeting is taking place near the 45th anniversary of the organization.  USET was incorporated on May 28, 1969 as a non-profit organization to build capacity and serve the broad needs of its member Tribes.  In 1969, United Southeastern Tribes, which would eventually take on the name, United South and Eastern Tribes, was founded by the Eastern Band of Cherokees Indians, the Mississippi Band of Choctaws Indians, the Miccosukee Tribe and the Seminole Tribe of Florida.  Now the membership includes 26 total federally recognized Tribal Nations.  USET is dedicated to enhancing the development of federally recognized Indian Tribes, to improving the capabilities of Tribal governments, and assisting the USET Members and their governments in dealing effectively with public policy issues and in serving the broad needs of Indian people.