CULLOWHEE – A woman described as one of the most significant chroniclers of Western Carolina University’s history delivered the keynote address at a ladies luncheon held recently in honor of the 125th anniversary of WCU’s founding in 1889.

Sara Sutton Madison, the granddaughter-in-law of WCU founder Robert L. Madison and granddaughter of one of the institutions’ first students, presented “Remembrances of Davies Hall (WCU, 1935-1941)” at the April 23 luncheon.

Having grown up, earned two degrees, taught and lived on Western Carolina’s campus, Madison recorded WCU’s history in her memoirs and donated artifacts “so that we might not forget that WCU was not just some little school on the side of the road, but that it had a personality,” said Susan Belcher, wife of WCU Chancellor David O. Belcher, in introducing her. 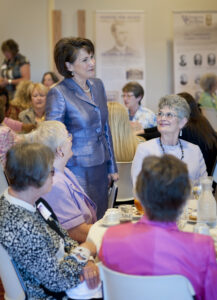 Madison was 6 years old when her family moved into Davies Hall, which served as a women’s residence hall where Reynolds Residence Hall now stands. Davies Hall had been converted to include faculty apartments in the 1930s, and several children called it home.

“It was the most magical growing-up that you could possibly have,” said Madison, who described life as a child in a building with a parlor, sweeping staircases and banisters perfect for sliding down. She talked about climbing mimosa trees and the people who brought the campus and the community to life. Among them was librarian Lillian Buchanan, who traveled each summer to find artists to come the following year as part of institution’s Lyceum program.

“We may have been in the mountains and we have been out in the country, but because of Mrs. Buchanan, I saw my first ballet and my first modern dance here. She played opera at the highest decibel and had beautiful art books and posters, and portraits of famous people signed by them,” said Madison.

“In Cullowhee, in little Davies Hall, all these things were going on,” said Madison. “It was really a place of a great deal of culture, and it started a long, long time ago.”

Part of what WCU’s founder achieved, she said, was creating an opportunity in the mountains to go to school to learn and know more about art and culture, and subjects such as Latin and grammar (which he did not hesitate to correct, she added).

Because of WCU, her childhood teachers were highly educated and opened her eyes to the world beyond Western North Carolina. While traveling as an adult with her husband and seeing sights such as Machu Picchu and Matterhorn, she thought back to fourth grade geography lessons.

“I had tears in my eyes when I saw those places I thought I would never, ever see that they had introduced me to in Cullowhee,” said Madison.

Other highlights of the ladies luncheon included historical exhibits centered on remarkable women and events at WCU. Musical tributes included “Carolina in the Morning” and “The Valley of the Lilies” performed by WCU alumnae vocalist Kim Schuler and accompanist Marietta Cloud in addition to the singing of the Alma Mater.

The dessert was a coffee cream pie from a recipe shared by the wife of a soda shop owner in Cullowhee in the 1945 edition of “Cullowhee Cookery.”

Attendees included Joan MacNeill, a former WCU trustee and current member of the University of North Carolina Board of Governors, and Teresa Williams, chair of the WCU Board of Trustees.

“We have a very special gem here in the mountains with incredibly talented people – our students, our faculty and our administrators, and they are making an incredible difference in many lives,” said MacNeill.

Williams thanked attendees for joining the celebration of WCU’s anniversary.

“For 125 years, Western has been adorned with the beauty of that of loyal friends and supporters, and I have to tell you she has never been more beautiful than she is today,” she said.