Cherokee senior Taran Swimmer nails a shot from around 35 yards out for her first of three goals during a home match against Mitchell on Thursday, April 24. (SCOTT MCKIE B.P./One Feather photos)

It is rare when a soccer player gets a hat trick (three goals) in a match.  It is almost unheard of for a player to do that twice in the same week.  But, that’s exactly what Cherokee senior Taran Swimmer did this past week.

After scoring the hat trick against Swain on Monday, she followed it up with another one against Mitchell at home on Thursday, April 24 to lead the Lady Braves to a 3-2 win.

“It’s pretty good considering its Senior Night,” said Swimmer who was playing in her last home match as a Lady Brave.  “For this match, I decided I wanted to play my very best and that’s what I did.  I hope the younger ones will take from that and try harder.”

Thursday’s match was quite a contentious match with a total of five yellow cards handed out and two penalty kicks awarded.

He added, “We’re just a team that is persistent.  They have done that all season, and for that, I’m happy that they were able to get the win on Senior Night.”

Speaking of Senior Night, four Lady Braves seniors and their families were recognized during halftime of the match including: Swimmer, Anna Cline, Andrea Cedillo and Avery Mintz.

On the match, Cherokee had 17 shots on goal to Mitchell’s four.

Mintz opened up the barrage on the Mitchell goalie with a shot at 37:13 that went wide right and another at 33:40 that appeared to break the plane of the goal but play continued and no goal was awarded. 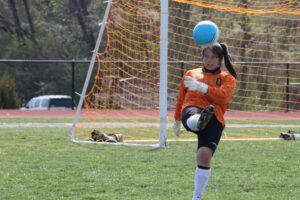 Cherokee goalkeeper Anna Cline punts a ball out following a save. She played another solid match.

Sidnie Yanez worked the right hash for the Lady Braves all match long.  She had two blasts in a row including one at 30:10 that went wide right and another a few seconds later at 29:28 that was saved by the Mitchell goalie.

Kaitlynn Lovelace got Mitchell’s first shot of the match off at 28:12, but it was easily scooped up by Cherokee goalkeeper Anna Cline.

Swimmer got her first goal of the match at 25:20 as she annihilated a ball from 35 yards out that sailed into the top right corner of the net.

Mitchell came back though a few minutes later with a goal of their own as Gabbie Sirois would find the back of the net at 22:48.

The Lady Braves came out running in the second half and Grant had a deflected shot into the goal nullified due to an offsides call at 34:15.  Several minutes later, Swimmer got her second goal of the match on a penalty kick to make it 2-1 Cherokee.

Mitchell’s Lovelace had a shot at 27:50 that went wide right, but then she found her mark five minutes later as she squeezed in a goal to make it 2-2.

A ton of action occurred with a little more than 12 minutes left in the match.  At 12:55, Mintz broke through the defense and sent a hard shot towards the Mitchell goalie who deflected it back to Mintz who then took a second shot that went wide right.

Fifty-three seconds later, Mintz sent another hard shot that was again deflected by the goalie, but this time Swimmer sent the deflected ball to the back of the net to make it 3-2.

Mintz had three more shots in the match including a penalty kick, but the match ended at 3-2.