Senior forward Avery Mintz scored two goals as the Lady Braves tied Tallulah Falls 2-2 at home on Tuesday, April 22.  On the day, Cherokee had six shots on goal and Tallulah Falls had seven.

Lady Braves head coach commented, “We came out sluggish, and I’m guessing they were tired from the overtime yesterday (April 21 game vs. Swain).  We struggled defensively to stay on our marks.  If we had just shut down one of their players, I think it would have been a lot easier.” 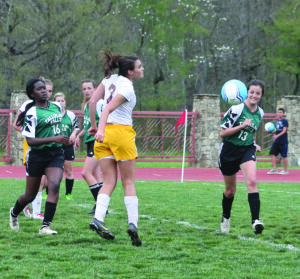 Senior forward Avery Mintz heads a ball from a corner kick in the second half of a home match against Tallulah Falls on Tuesday, April 22. She scored two goals in the game which ended in a 2-2 tie. (SCOTT MCKIE B.P./One Feather photos0

He added, “I’m just happy that Avery (Mintz) was able to put a couple away.  She worked hard all game.  It’s nice when a striker works hard and it pays off.”

Cherokee had the first shot of the game as Virginia Grant shot wide left just seven minutes in.  Two minutes later, Andrea Cedillo had a shot that was saved by the Tallulah Falls goalie.

Tallulah Falls broke through with a goal the 13:13 mark as Ashton Boyd blasted one into the goal from about 25 yards out.

But, their lead was short-lived.  Mintz broke through the Tallulah Falls defense and sent one into the back of the net with just three minutes left before the half. 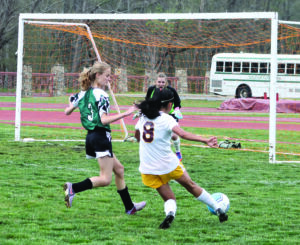 Sophomore forward Sidnie Yanez dribbles by Tallulah Falls’ Linden Pederson to shoot on goal in the second half of Tuesday’s game.

Cherokee came out of the halftime break ready and pressed the action up field much harder than in the first half.  Sophomore forward Sidnie Yanez broke through on the right hash and sent one in that just went over the goal at the 37:10 mark of the second half.

Three minutes later, Boyd would score her second of the game as she hit one from around 20 yards out to make it 2-1 just six minutes into the second half.

Yanez had another shot on goal eight minutes later that was saved by the Tallulah Falls goalie.  Tallulah Falls came back and Grace Farrow shot one that went just wide left.

Cherokee continued to press, and at the 15:18 mark, senior midfielder Taran Swimmer drilled one that bounced off the top of the post just missing the tying score.

Seven minutes later, Farrow had a free kick for Tallulah Falls from about 35 yards out.  She struck the ball very well, and it was heading right for the top right corner of the goal when Cline leapt up and knocked it away saving the game for Cherokee.