SAPPHIRE – The Cherokee Braves golf team took first place in convincing fashion at the Blue Ridge-hosted Sapphire National match on Tuesday, April 22.  The Braves shot a combined score of 351 on the par-70, 6,009-yard 18-hole course; good enough to take a 67-stroke victory over the hosting Blue Ridge Bobcats.  Hiwassee Dam also competed but did not qualify due to a lack of players.

“This was our first 18-hole match of the season, and it was also our best all-around performance so far,” said Braves coach Andrew Maney.  “If you take our total score, divide it by two, that’s putting us at 175 or 176 for a nine-hole match.  I think our best score for the year in a nine-hole match was 185.” 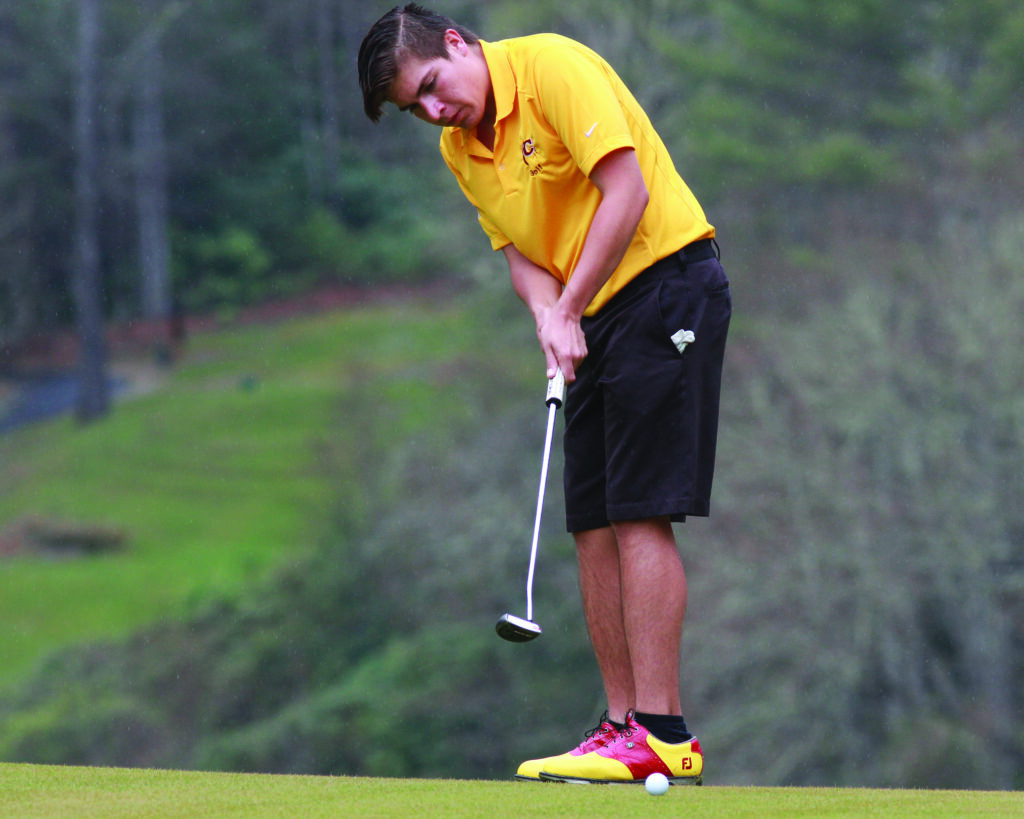 Cherokee senior Tagan Crowe putts during Tuesday’s match at Sapphire National. He led the field with an outstanding 76 as the Braves took first place in the match. (AMBLE SMOKER/One Feather)

The Braves were represented well with the top three individual spots occupied by members of the Cherokee golf team.  Tagan Crowe finished first with 76, Christian Ensley second with 85, and Derrick Ledford third with 94.  Logan Teesateskie finished close to the top three by shooting a 96, Steven Straughan shot 112, and John Lossiah finished with 134.

Crowe led the field with another outstanding performance, shooting just six-over par to card a 76 on the unusually cool and sopping day.  Crowe, battling through the elements with the rest of the field, started slow with a bogey on the first hole but promptly returned to his normal game by paring out the next three holes.  His first birdie of the day came on the long par five, hole-five after meticulously reading the green and dropping a twenty-foot putt.

Christian Ensley also finished strong in the last match before heading into the Smoky Mountain Conference tournament on Thursday.  He was able to shoot his best round of the season by getting few pars on the course.  However, the highlight of his day was on the tenth hole where he chipped from the fairway to within a foot of the hole, enabling an easy tap-in to save par.

Reflecting on the match, Coach Maney stated, “I was extremely proud of our guys and how they played.  Tagan and Derrick came back from the senior trip with a strong match.  Derrick’s final carded score doesn’t show it, but he shot a 43 on the back-nine.  Christian played his best round of the season and finished with a solid 85.  If we carry this over into our conference tournament beginning Thursday, we should be right at the top of the conference standings at the end of the tournament on Monday.”

The Cherokee Braves golf team travels to Chatuge Shores in Hayesville on Thursday, April 24 to play the first round of the Smoky Mountain Conference tournament.  They will then travel back to Sapphire National Golf Club on Monday, April 28 to compete in the second round.