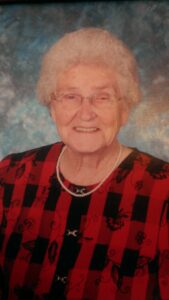 Floy Lambert Mathews, 90, of the Towstring Community, died Sunday, April 20, 2014 at her residence. A native of Swain County, she was the daughter of the late Cora and Jesse Lambert. She was a devoted wife, mother and grandmother. She was a member of the Towstring Baptist Church.

She was preceded in death by her husband, Seab Mathews and a son Wayne Mathews.

The graveside services will be held at 2pm on Wednesday, April 23 at Towstring Cemetery with the Reverend J.T. Lambert officiating.

The body will be taken back to the home by Crisp Funeral Home at 2pm on Tuesday, April 24 to await the hour of service.

The grandsons will be pallbearers.