BRYSON CITY – After throwing for more than 6,200yds in his high school career, Raymius Smith is going to be a pirate this fall.  The EBCI tribal member and Swain County senior signed a letter of intent on Tuesday, April 15 to play football at East Carolina University this fall.

He made the second team All-Western squad in 2012, was named 2013 Smoky Mountain Conference Player of the Year, and was named to NCPreps.com All-State Honorable Mention team in 2013. 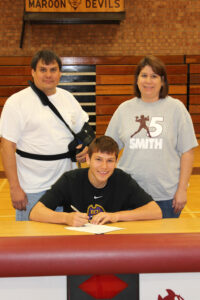 Raymius (seated) is shown with his father, Tim Smith, and mother, Kissi Smith.

His father, Tim Smith, commented, “I’m just so proud of him.  We’ve worked for this since he was eight years old.  He told me when he was young that’s what he wanted to do and we put in hours and hours of time.  It is a dream come true.  He wanted to be a Division 1 football player and now he gets a chance to be one.”

Raymius, a standout quarterback at Swain County, will continue at that position at East Carolina.  “I will be a quarterback, and I get a chance to be the second on the depth chart right off the bat.”

Tim added, “They’re a good program going into a new conference, the American Conference.  Central Florida won that conference last year and then went on to win the Fiesta Bowl.  It’s a good, upcoming conference so we’re excited.”

Raymius’ mother, Kissi Smith, said, “We had long nights and long weekends, but it all paid off.  I’m just very proud.”