Karen George, an EBCI tribal member and master fingerweaver, makes beautiful fingerwoven belts, sashes and garters using materials and techniques that were used frequently in the 18th Century.  But, the history of Cherokee weaving goes back much farther than the 1700s. 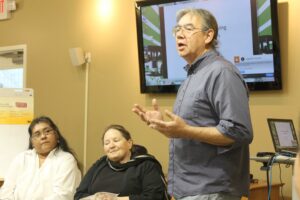 Cherokee craftsman Davy Arch discusses the weaving properties of mulberry bark during a presentation on traditional Cherokee weaving at the Museum of the Cherokee Indian on Friday, April 11 as Karen George (left) and Dr. Barbara Duncan look on. (SCOTT MCKIE B.P./One Feather photos)

“Cherokee weaving goes back 11,500 years,” said Dr. Barbara Duncan, education director at the Museum of the Cherokee Indian, at an event held at the Museum on the night of Friday, April 11.

She gave a presentation on the history of Cherokee weaving and showed photos of some artifacts from thousands of years ago including a twined shoe, found in a cave, that was woven in one piece over 4,000 years ago.

“This is not really what people think about when they think of Cherokees and Native American culture,” said Duncan. 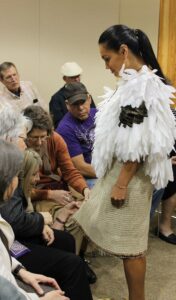 People get a closer look at a Cherokee woven skirt, a reproduction of one found in a cave in Tennessee, that is modeled by EBCI tribal member Kara Martin who will wear it as she competes at the Miss Indian World pageant later this month.

But, there are not many examples left of these historic weaving projects.  “In this damp and acidic soil in the southeast, very few of the textile artifacts remain.  They are very few and far between.”

She spoke of several other pieces that have been found including a skirt that was found in a cave near Clifty Creek, Tenn.  The skirt is 24” long and 44” around.  “There were a lot of minerals in the cave and that’s what preserved the fabric.”

Deborah Harding, anthropologist and collections manager at the Carnegie Museums in Pittsburgh, used the Clifty Creek skirt as a reference to make a modern-day reproduction.  That skirt was modeled at Friday’s event by EBCI tribal member Kara Martin who will wear it during the Miss Indian World pageant at the Gathering of Nations Pow Wow in Albuquerque, NM on April 24-26.

The reproduction skirt was made from European hemp.

Duncan related, “This represents what a Cherokee woman would have been wearing in the 1700s.”

Cherokee weaver Karen George shows examples of cords she has woven out of dogbane.

Cherokee craftsman Davy Arch was at Friday’s event and spoke about the different plant resources used in traditional Cherokee weaving.  He showed some mulberry bark that he said has “really strong, fine fibers.”

He said the fibers can be dyed in a process similar to dyeing splints for baskets…and, those fibers are strong.

“The textiles made out of this stuff is more durable than most of what we have around today,” said Arch.  “Hickory bark is the strongest.  It’s probably twice the tinsel strength of cotton.  It’s stout.”

During Friday’s presentation, George showed some examples of her attempts at weaving with dogbane.  “I didn’t really know how to do this, and I’m trying to figure it out as I go along.”

She showed braided strands of dogbane that could be made into nets, bags, clothing, bowstrings, fishing line and much more.

Arch said some of the weaving resources are hard to find.  “Development has really done a number on a lot of traditional resources, but, as we work together, weaving resources will increase.  I can see it really expanding.”