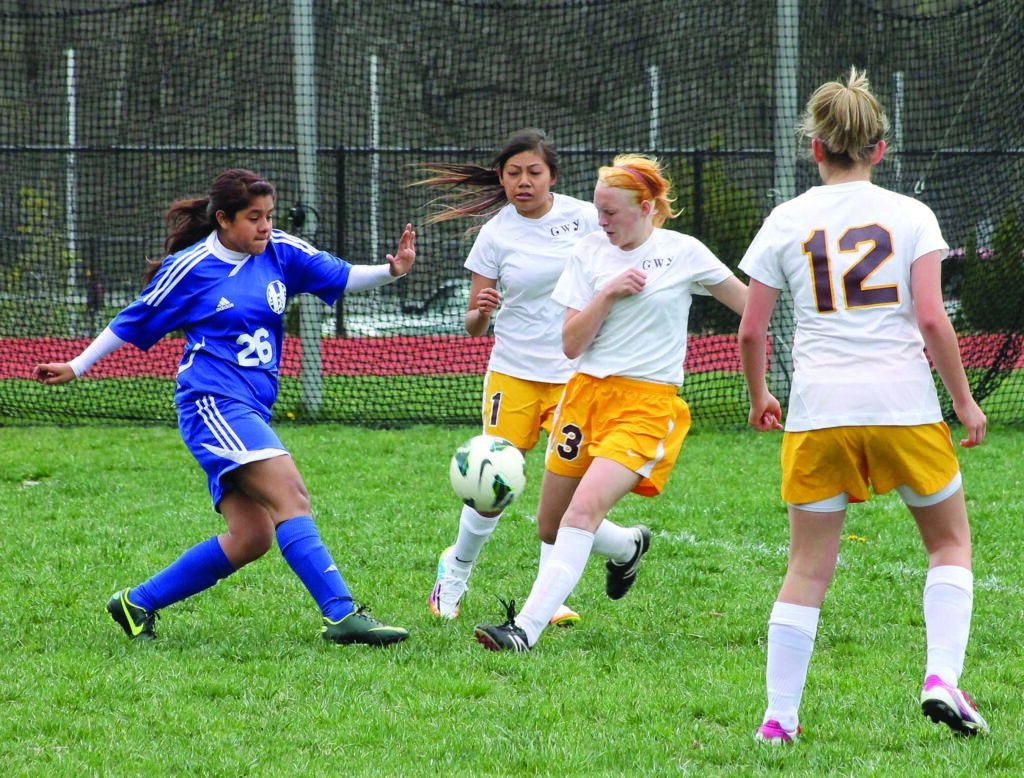 On a very chilly afternoon that felt more like December than April, the Highlands Lady Highlanders defeated the Lady Braves 2-0 at Cherokee High School on Tuesday, April 8.  Freshman Blakely Moore scored both goals for Highlands who is currently ranked #10 in the state.

“We are a little disappointed,” said Lady Braves head coach Sebastian Brun.  “I think the spring break just really took it out of us with not being here for a week.  I don’t think they’ve had their spring break so they were at full steam.  We’re just disappointed.” 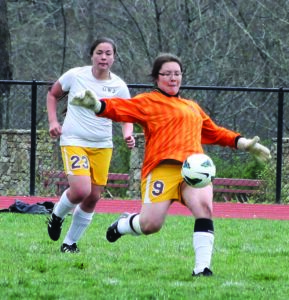 Cherokee goalkeeper Anna Cline punts the ball following a save in the first half. On the game, she had over 10 saves.

Despite giving up two goals, Cherokee’s back line of junior fullback Peri Wildcatt and senior goalkeeper Anna Cline played very well.  Cline had over 10 saves in the game.

Coach Brun had this to say of Cline, “Anna’s doing great.  I remember her playing as a freshman, and she’s come along way, but she’s always had the heart and wants to be there and that’s 100 percent of it, just wanting to be there and wanting to get the ball.  She’s pretty solid.”

Highlands’ Blakely Moore (#11) squeaks a goal past Cherokee goalkeeper Anna Cline in the second half of Thursday’s game. Moore had two goals on the day.

The first goal of the match came at 33:50 in the first half when junior Kirstyn Owen slipped a pass in the middle of the box to Moore who drilled it home.  Highlands kept the ball on their half of the field for the majority of the first half.

Cherokee only had one shot on goal in the first half when senior forward Taran Swimmer kicked one that went just wide left with just over 14 minutes left before halftime.

Cline was tested early in the second half and made several outstanding saves including a lightning strike by Moore at the 37:45 mark.  Ten minutes later, Owen broke through the defense and had a straight shot on goal but sailed it over the posts.

Moore got another shot on goal at 19:25 that was saved by Cline, and then she got her second score of the game with 17:06 left.

The Lady Braves play Haywood Christian at home on Thursday, April 10 at 4pm.