The recital will kick off a year of celebration of the bicentennial of the birth of Adolphe Sax, the Belgian instrument maker and inventor of the saxophone. 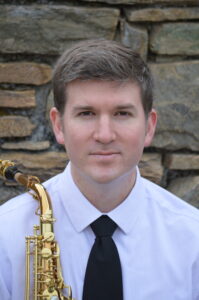 The program will feature a combination of new and historic works for saxophone, focusing on the instrument’s chameleonic character. The program will include Jerome Savari’s “Fantasy on Themes from Freischutz,” which borrows music from Carl Maria von Weber’s groundbreaking Romantic opera in one of the earliest examples of solo music for the saxophone, and Stephen Lias’s “Five Characters from David Copperfield,” which offers a modern, comical view of some of the most famous literary characters of the Victorian period.

Other works to be performed are Fernande Decruck’s “Sonata in C#,” Giacinto Scelsi’s “Tre Pezzi” and Barry Cockcroft’s “Ku Ku.”

Jeffress has commissioned or premiered more than 20 new works by both emerging and established composers including Shih-Hui Chen and James Matheson. He maintains an active private studio of pre-college saxophonists in the Asheville area and is co-founder and artist-faculty of the Carolina Saxophone Camp.