The Lady Braves used their patented fast break and full-court press to keep the Robbinsville Lady Black Knights on their heels the entire game during 1A state playoff second round action on Wednesday, Feb. 26.  Cherokee won 71-55 and advance to the Sectional Final against #12 seed Rosman on Friday, Feb. 28 at 7pm at the Charles George Arena. 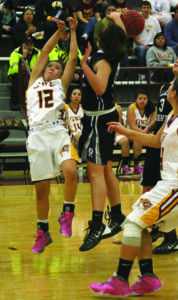 “We played pretty good tonight,” said Lady Braves head coach Chris Mintz.  “I think, defensively in the first half, especially, was the difference in the game when we were able to get a lead on them and then stretch it out a little bit.  That’s an important part in them not being able to slow the ball down.”

The Lady Braves shot well in this game at 51 percent from the field – a statistic that has Coach Mintz very happy.  “It’s always good to start playing better, and we started putting up some points again and getting back into the flow.  We had some other people step up which makes it that much easier.”

Cherokee came to play and started out the game on a 9-0 tear.  It was almost mid-way through the first period before Robbinsville got on the board.  The Lady Braves ended up outscoring Robbinsville 19-11 in that first period and took a 37-24 lead into the locker room.

But, it was the third quarter that really put the nail in the coffin for the Lady Black Knights.  Cherokee came out of the locker room firing on all cylinders and outscored Robbinsville 20-5 to pretty much seal the game. 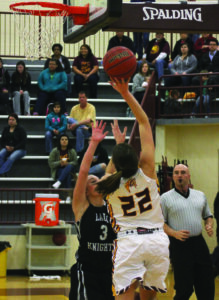 Avery Mintz (#22) shoots around Robbinsville’s Erin Maennle (#3) during Wednesday’s game. Mintz had 19pts and 12 rebounds on the night.

Kendall Toineeta led Cherokee with 20pts followed closely by Avery Mintz with 19 and Bree Stamper with 18.  Toineeta also had 5 assists and 6 steals on the game.  Mintz had 12 rebounds and 3 steals.

Overall, the Lady Braves had 15 steals to Robbinsville’s 2.