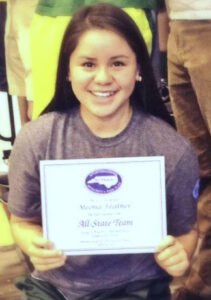 EBCI tribal member Meona Feather, a freshman at Rabun Gap – Nacoochee School, has been named to the North Carolina Independent Schools Athletic Association (NCISAA) 3-A All-State team.  On the season, she averaged 14.3pts, 3.9 assists, 1.5 steals and 3.8 rebounds per game.  She made 85 three-point shots (40 percent) on the season.

“Meona led us in almost every category this season,” said Rabun Gap head coach Dale Earnhardt.  “She was one of our captains.  Her basketball IQ is as high as any player I have coached.  She played a huge part in our 21-5 record.”