GREENSBORO – Five tribal members from Cherokee, Swain and Robbinsville High Schools traveled to Greensboro to participate in the NCHSAA tournament on Feb. 21-22 with several individuals walking away with medals.

In a rematch from the close showing a week prior during the finals of the 1-A western regionals tournament, McCoy (29-0) collected his second state championship by pinning Avery County’s Ryan Sheppard at the 1:24 mark in the third round.

McCoy seized control of the bout early by racking up take down points and jumping out to a 10-2 lead going into the third round.  However, it was during the third and final round when McCoy was in the down position, down blocked on a shot by Sheppard, kept ahold of his arm and whipped Sheppard over to put McCoy in position to gain the pin.

Swearengin is shown with his fourth place medal.

“It was just one of those positions where he’s pretty familiar with it, so he knew what to do.  By doing so, he secured himself a second state championship,” said Swain coach Adam Jaimez.

McCoy finished out his illustrious junior season undefeated.  This was his second championship title in two years as he won his first as a sophomore with Robbinsville in 2013.  He also placed fourth as a freshman in 2012.

Coach Jaimez noted, “We are very proud of him, he’s very deserving.  We’re fortunate to have him, he’s a hard worker and everything’s that he’s gotten this year is well earned.” 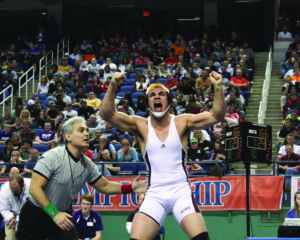 Cherokee coach Will Lambert stated, “He came in and did a real good job.  He had the competitor who actually won the championship on his back in the first period.   We were really excited about that, but he eventually ran out of gas.”

Swearingen won another nail bitter in the semi-finals of the consolation match by pinning Marlon Macintyre of Pamlico, but he ultimately finished fourth with a loss to Rosman’s Tanner Whitman.

Full results of the five EBCI wrestlers are as follows: