The Lady Braves (23-3) proved why they received the #1 seed in the western Section of the 1A state playoffs with a signature win over the Mitchell Lady Mountaineers on Monday, Feb. 24 at the Charles George Arena.  Cherokee won big 77-37 behind 23pts by Avery Mintz and 16 by Kendall Toineeta. 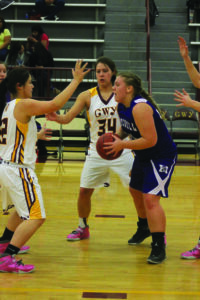 “We came out kind of flat because we had just played a really emotional game last Friday, but we turned it on when we needed to and ended up winning the game by a large amount,” said head coach Chris Mintz.

In looking ahead, he said there is still a lot of stiff competition, “Nothing’s going to be easy this time.”

Monday’s game did start out a little flat for the Lady Braves and Mitchell even led by a point very early on, but after that it was all Cherokee.  The Lady Braves ended up leading 25-6 after the first period and 44-14 at the half. 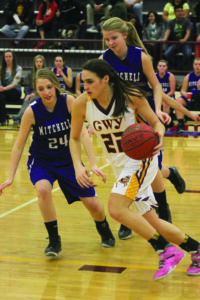 Every player on the Cherokee roster got playing time in this game which will help going down the stretch as players coming off the bench frequently make much-needed contributions during playoff time.

The Lady Braves got a whopping 18 steals in this game with Mintz having 5 and Toineeta and LeLe Lossiah each having 4.

Cherokee hosts #9 seed Robbinsville for the 2nd round on Wednesday, Feb. 26 at 6pm.