BRYSON CITY – The Lady Braves (22-3) were the runner-up in this past week’s Big Smoky Mountain Conference tournament following a tough 55-49 loss to Hayesville in the finals on Friday, Feb. 21.  After blowing out the Murphy Lady Bulldogs 73-52 on Thursday, the Lady Braves came against a scrappy Lady Yellow Jackets team that shot 51 percent from the field in the finals. 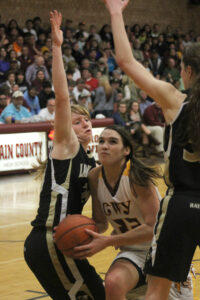 The Lady Braves showed a lot of heart in this game.  They were down by as many as 15pts in the third period, but came back and actually took a 1pt lead with about three minutes left in the game with great hustle and deafening cheers from Cherokee fans.

Hayesville led 16-12 after the first period and then outscored the Lady Braves 15-8 in the second to take a 31-20 lead into the locker room.  Cherokee came back outscoring Hayesville 15-14 in the third and 14-10 in the fourth, but a couple of missed shots and a late turnover sealed the game for Hayesville.

“They showed their heart,” head coach Chris Mintz said after the goal.  “They played with a lot of heart.  They could have folded.”

He is optimistic about his team going into the playoffs.  “Tough games like this make you tougher so hopefully it’ll help us out and we can get back to Greensboro and have a shot at it.”

To advance to the finals, Hayesville defeated Robbinsville 59-54 on Thursday.

Cherokee fans filled the arena with cheers on both nights of the tournament. Here, they bring the walls down in the fourth period of the girls final against Hayesville. 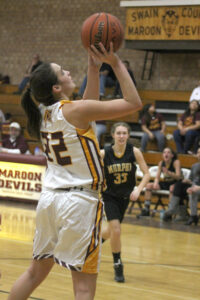 Avery Mintz shoots a short jump-shot during Thursday’s game against Murphy. She lead the Lady Braves with 19pts on the night.

Following a bye in the first round due to their #1 seed, the Lady Braves faced #5 seed Murphy in the semi-finals on Thursday, Feb. 20.

The Lady Braves came out running in this game and built up a 28-10 lead after the first period.  The Lady Bulldogs got a little more offense going in the second quarter, but not much more as Cherokee took a 47-24 lead into the locker room.  The second half was a little more even with Murphy actually outscoring Cherokee by two points, but the first half lead was too much for them to overcome and the Lady Braves won by 21.

To advance to the semi-finals, Murphy defeated #4 seed Rosman 67-53 in the first round.  Other first round games included:  Robbinsville 63 Swain 39 and Hayesville 61 Andrews 23.