BRYSON CITY – The Cherokee Braves (15-10) were the runner-up in this past week’s Big Smoky Mountain Conference tournament held at Swain County High School.  After defeating Andrews 51-45 in the semi-finals, the Braves ran into shooting issues in the finals against Robbinsville on Friday, Feb. 20 losing 66-52. 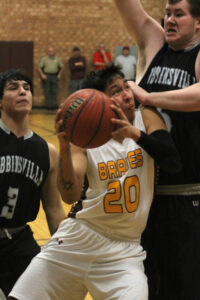 Darius Thompson (#20) squeezes between Robbinsville’s Cruz Galaviz (#3) and Jesse Franks (#5) as he drives to the basket during Friday’s final of the SMC tournament.

The Braves only shot 28 percent from the field and 16 percent on three-point shots (4 of 25).  When asked after the game what his team might be able to take from the game, head coach Willis Tullos replied, “Nothing.  It’s a totally worthless night.  There’s nothing you can get out of this…you’ve got to score to win a basketball game, and we shot terribly so there’s nothing you can take from this except a loss.”

Coach Tullos said his team needs some confidence going into the playoffs.  “They need to learn to play big games.  Big games are different from the regular season, and we haven’t been in any big games.” 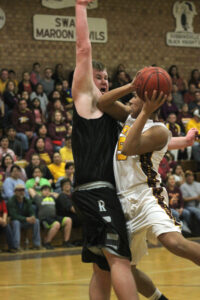 Kennan Panther drives to the basket against Robbinsville’s Jesse Franks (#5).

Robbinsville didn’t shoot much better from three-point range at only 20 percent, but their field goal percentage was much better at 45 percent.  That said, the first half was very close as the Black Knights led 12-8 after the first period and only led by two (27-25) at the half.

They did begin to pull away in the second half outscoring Cherokee 17-10 in the third and 22-17 in the fourth to take the 14pt win.

Jesse Toineeta led the way for Cherokee with 22pts followed by Dustin Johnson with 12.  Johnson also had 16 rebounds and 5 steals.

Robbinsville defeated Hayesville 40-33 on Thursday night to advance to the finals. 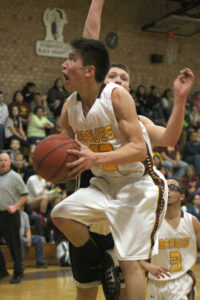 Dustin Johnson (#22) goes inside for a lay-up in the first period of Thursday’s semi-final game against Murphy.

After a first round bye due to their #1 seed, the Braves faced Andrews in the semi-finals on Thursday, Feb. 20.

This game was tight in the first half with the Braves taking a slim 12-11 lead after the first period.  The second period was deadlocked at 11pts each, and Cherokee took that 1pt lead into the locker room.

The third period was a different ballgame.  Cherokee came out on fire and doubled Andrews’ points in the period 16-8 to go up 39-30.

Andrews came back and got to within 3pts at several times in the fourth period.  The game changer came with 12 seconds left.  Cherokee was up 49-45 and Andrews had the ball when Darius Thompson stole the ball and drove down for a layup with 9 seconds left to seal the game for the Braves.

Thompson led the Braves with 16pts followed by Jason McMillan with 13.  Cherokee had 14 steals in the game including 4 by McMillan and 3 by Thompson.

To advance to the semi-finals, Andrews narrowly defeated Murphy 49-48 in the first round.  Other first round games included:  Hayesville 72 Rosman 35 and Robbinsville 66 Swain County 58.