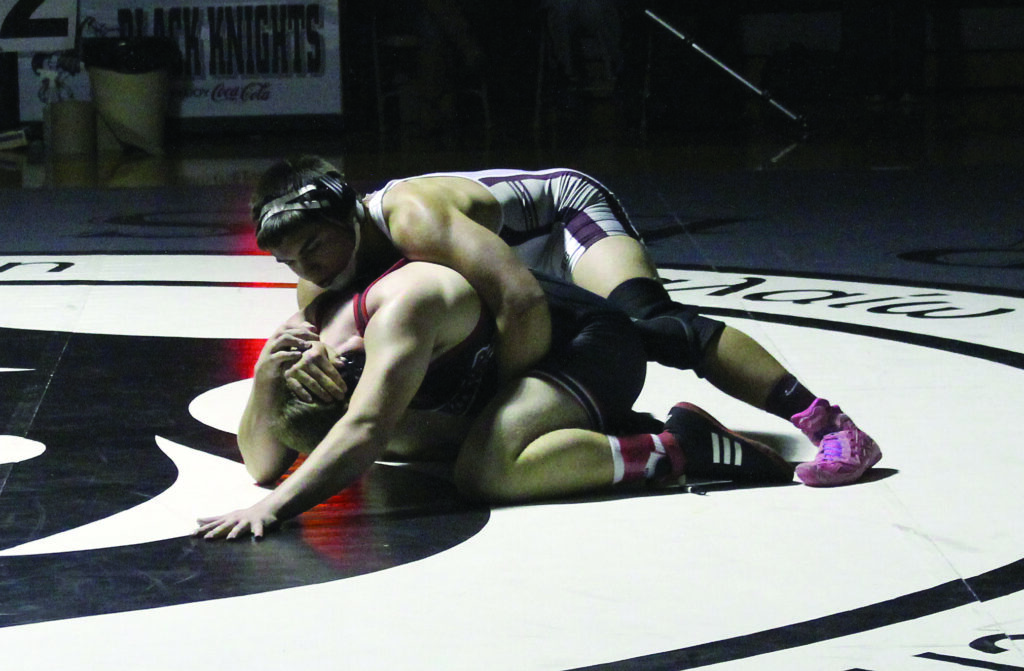 Swain’s Spencer McCoy (top) won his second 1A West Regional Championship at 195lbs this past weekend. He is set to defend his state title this weekend in Greensboro. (AMBLE SMOKER/One Feather photos)

It wasn’t a matter of if, but when for Swain’s Spencer McCoy to qualify for the 1A Wrestling State Championships in Greensboro. During the 1A Western Regional wrestling tournament in Robbinsville on Feb. 15-16, McCoy defeated two opponents on Saturday to secure his spot in the much sought after finals held on Sunday.  Under the big bright light inside the Robbinsville gymnasium, McCoy bested Avery County’s Ryan Sheppard by a 4-3 decision to secure the victory and the Regional Championship.

With the impressive showing at the 1A Western Regional tournament over the weekend, McCoy has now improved on his brilliant season to remain undefeated and enter next week’s tournament with the number 1 seed.

McCoy holds the bracket for the 195lb division he won.

Coach Adam Jaimez commented on the McCoy’s performance, “He wrestled well tonight.  He’s won Regionals twice now.  The biggest thing is we’re heading into State as the number 1 seed and we’ll wrestle the 4 seed out of the west. He’s undefeated this year, and the big thing is he’s ranked number 1 in the state right now, but our goal is to be number 1 ranked at the end of the year.  He’s worked hard for that streak he has going.”

The state tournament is a great opportunity for wrestlers to display their skill and mettle against the best competition in the state.  When asked if any special preparations were taking place, Coach Jaimez emphasized, “These guys are creatures of habit, and you try to keep things the same as possible.  We may go practice with a couple other teams to switch things up a little bit. Just trying to keep them ready.  We expect nothing but good things.  If we work hard, I think opportunities will present themselves and we just need to take advantage of them.”