“Robert was an important friend and mentor to many faculty, staff and students at Western Carolina University, as well as a vocal advocate for the preservation and promotion of Cherokee culture both in Oklahoma and on the Qualla Boundary,” said Richard Starnes, dean of the WCU College of Arts and Sciences. “He will be greatly missed.” 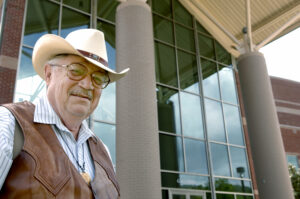 Born in Cushing, Okla., on Dec. 29, 1940, Conley finished high school in Wichita Falls, Texas, in 1958. He attended college at Midwestern University, where he earned his bachelor’s degree in drama in 1966 and his master’s degree in English in 1968.

Although born in Oklahoma, Conley said that accepting the position at WCU and moving to Western North Carolina was like coming home “…because North Carolina is home to all Cherokees.”      Prior to joining the faculty at WCU, he was assistant programs manager for the Cherokee Nation of Oklahoma, director of Indian studies at Bacone College and Morningside College, coordinator of Indian culture at Eastern Montana College, and instructor of English at Southwest Missouri State University and Northern Illinois University. He also held teaching and administrative appointments at the University of New Mexico and Lenoir-Rhyne College, and served as elder-in-residence at the University of North Carolina at Chapel Hill.

A prolific author with more than 80 books to his credit during his career, Conley recently was named the 2014 recipient of the Western Writers of America’s Owen Wister Award for Lifetime Contributions to Western Literature. The award, the nonprofit organization’s highest honor, is scheduled to be presented posthumously during the organization’s annual convention in June in Sacramento, Calif.

The lifetime recognition award represents the latest in a long list of honors for Conley, including the Wordcraft Circle “Wordcrafter of the Year” in 1997 and “Writer of the Year” in 1999 for fiction for his “War Women.” His “The Cherokee Nation: A History” was selected by the American Library Association as an “outstanding academic title” for 2005, and his “Cherokee Medicine Man” was a 2007 nominee for the Oklahoma Reads Oklahoma competition. He was inducted into the Oklahoma Professional Writers Hall of Fame in 1996, and he was recipient of a lifetime achievement award in 2009 from the Oklahoma Center for the Book.

Shortly after his appointment to WCU’s Sequoyah Professorship, he was selected to receive the 2009 American Indian Festival of Words Author Award, presented to outstanding American Indian writers who have made significant contributions to American literature. It is the only existing award given by a public library to honor an American Indian author. 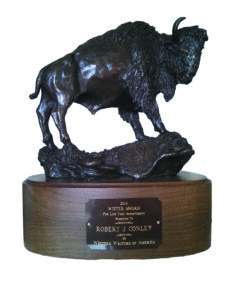 A prolific author with more than 80 books to his credit during his career, Conley recently was named the 2014 recipient of the Western Writers of America’s Owen Wister Award for Lifetime Contributions to Western Literature.

Conley’s poems and short stories have been published in numerous periodicals and anthologies over the years, including publications in Germany, France, Belgium, New Zealand and Yugoslavia, with translations in Cherokee, German, French and Macedonian. His debut novel, “Back to Malachi,” was published by Doubleday in 1986.

His works ranged from short stories and essays to the novelization of the screenplay “Geronimo: An American Legend,” and include titles such as “Ned Christie’s War,” “Mountain Windsong: A Novel of the Trail of Tears,” “The Dark Way,” “War Woman,” “Cherokee Dragon,” “Nickajack,” “The Dark Island” and “Yellow Bird: An Imaginary Autobiography.”

Conley was known for his wit and dry sense of humor. He told True West magazine after his “The Cherokee Nation: A History” was named a top academic title in 2005, “For years I was a member of ‘Academics Anonymous,’ but they made me resign when I became the Sequoyah Professor of Cherokee Studies. I still have never written any footnotes, and I’m not planning to.”

Roseanna Belt, WCU Cherokee Center, commented, “On behalf of the Cherokee Center and Western Carolina University, we express our deep sadness at the passing of Robert J. Conley, prolific author and Sequoyah Distinguished Professor of Cherokee Studies at Western Carolina University since 2008.  He was a true friend and colleague who will be greatly missed.  His contributions to the Cherokee world are immeasurable.  His presence at Western made all of us proud.  Deepest condolences go to his wife, Evelyn Conley.”

He was the son of the late Robert Parris and Peggy Jackson Conley. In addition to his parents, he was preceded in death by his brother, Thomas; and two children, Robert Parris Conley and Vanessa Edith Conley.

He is survived by his wife of 38 years, Evelyn Snell Conley; a son, Eddie of Tahlequah, Okla.; a daughter, Cheryl of Tahlequah.; four grandchildren and five great-grandchildren; and two sisters, Peggy Cline of Jacksboro, Texas, and Donna Hammond of Roseburg, Ore.

Gifts in memory of Conley will be accepted by the WCU Tsalagi (Cherokee) Institute, which he founded to focus on the coordination and implementation of future projects involving WCU, the Eastern Band of Cherokee Indians and other Native American constituents. Gifts may be made by sending a check to Western Carolina University, Office of Development, 201 H.F. Robinson Administration Building, Cullowhee, N.C. 28723, with “Tsalagi Institute” in the memo line; through the website give.wcu.edu; or by calling 828-227-7124 (toll-free at 800-492-8496).

Appalachian Funeral Services of Sylva is in charge of arrangements.