The Lady Braves (18-2) avenged an early season loss to Hayesville with a key 53-40 win over the Lady Yellow Jackets at the Charles George Arena on Tuesday, Feb. 4.  With the win, the Lady Braves are now in first place in the Big Smoky Mountain Conference.

The Braves (11-9) increased their win streak to five games with a 85-71 win.  Their win sets up a huge conference game against Robbinsville, who is currently in first place in the Big Smoky Mountain Conference, at home on Tuesday, Feb. 11.

Cherokee started out slowly in this game and trailed 14-5 after the first quarter.  They got things going in the second half with a stiffer defense and better rebounding and only trailed at halftime 21-15. 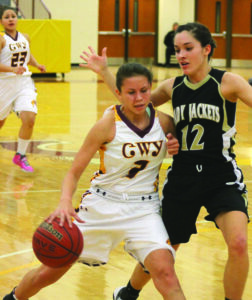 The Lady Braves came out of the locker room ready to play and outscored Hayesville 16-8 in the third period to take a two-point lead into the final period.  It was back and forth in the first few minutes of the fourth period, but Kendall Toineeta, the game’s top scorer with 26pts, hit a three-point shot with just over four minutes left to give the Lady Braves the lead.  And, they never relinquished it.

Cherokee outscored Hayesville 22-11 in the fourth period due, in part, to a flurry of scoring in the final minutes.

Dustin Johnson (#22), who had 39pts, shoots over Hayesville’s Owen Gibson during Tuesday’s game.

Dustin Johnson poured in 39pts to lead the Braves in this key conference match-up as they handed Hayesville only their second conference loss of the season.

The first half was relatively even with the Braves taking a five-point (22-17) lead after the first period and leading by five 39-34) at the half.  In the second half, the Braves began to pull away  outscoring the Yellow Jackets 20-13 in the third period and 26-24 in the fourth. 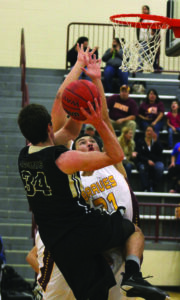 Jason McMillan also had a hot hand on the night shooting 67 percent from the field for 17pts.  He also added 11 rebounds and 3 steals.