Cherokee’s Levi Swearengin (left) holds the bracket board he won as he was awarded first place in the 126lb division at the Smoky Mountain Conference wrestling tournament on Saturday, Feb. 1. (Photos courtesy of Anthony Swearengin)

Jaron Bradley and Levi Swearengin took home top honors as the Cherokee Wrestling team finished fifth in the tournament.  Other notable wrestlers include Raymond Taylor who finished third at 285 and Anthony Toineeta who took home fourth at 132.

At an astonishing record of 25-3, with 17 pin falls, 6 decision and only 2 wins via forfeit, Jaron Bradley caps off a remarkable regular season run as he takes first place at the Smoky Mountain Conference tournament in the 152lbs weight class.  Jaron is currently ranked fifth in the latest individual state rankings from RetroRankings.com 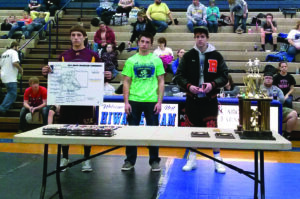 Another standout wrestler, Levi Swearengin, also took home the top prize in the 126lbs weight class.  Levi has wrestled with significant success this year as he is currently ranked second in the latest individual state rankings from RetroRankings.com

Full Cherokee results from the tournament are as follows:

Robbinsville won the SMC tournament with 195 points, followed by Rosman in second with 161.5 points and Murphy in third with 144 points.  The next wrestling match will begin Friday, February 14-15 where several members of the Cherokee Braves will advance to the 1A West Regionals.