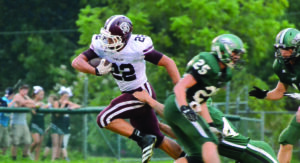 EBCI tribal member Spencer McCoy, shown carrying the ball against East Henderson this past season, has been named to the NCPreps.com All-State 1A team. (Photo courtesy of McCoy family)

Spencer McCoy, an EBCI tribal member and a junior at Swain County High School, has been named to the NCPreps.com All-State 1A team as an outside linebacker.  On the season, he had 77 tackles including 10 for loss and 2 INTs.

McCoy also played on the other side of the ball as a running back where he carried the ball 229 times for 1,588 yards and 26 TDs.

This is quite an honor for Spencer and Zach Weeks, who was also named, to be singled out as one of the top 1A players in the state,” said Swain head coach Neil Blankenship, “and, certainly one that is well-deserved.”

McCoy is also a talented wrestler and won his third consecutive Smoky Mountain Conference championship on Saturday, Feb. 1.  In the 2013 season, he won the conference title, the 1A West Regional title and the 1A State title at 195lbs.