It was a good night for Cherokee basketball as both varsity teams defeated visiting Highlands at home on Friday, Jan. 31.  The Lady Braves (17-2), currently ranked #6 in the state Maxpreps.com poll, beat the Lady Highlanders 76-31, and the Braves (10-9) pulled above .500 on the year with a 71-50 victory. 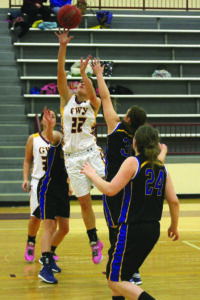 Cherokee jumped out early in this game with superior defense and led 19-9 after the first period and carried a whopping 43-13 lead into the locker room at the half.  They came out in the third period rolling and outscored Highlands 33-18 in the second half to win by 45. 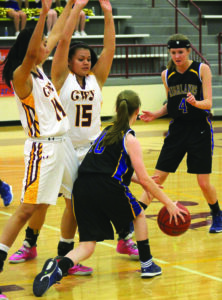 Not in our house – Cherokee’s Miranda Smith (#14) and Blake Wachacha (#15) put up a staunch defense against Highlands’ Ann Marie Crowe (#10).

Kendall Toineeta led Cherokee with 28pts followed by Avery Mintz with 16.  Toineeta, who leads all of western North Carolina in assists and steals, had 4 assists and 5 steals in this game.  Mintz added 5 steals and 4 assists as well.

Overall, the Lady Braves shot 47 percent from the field compared to Highlands’ 38 percent.

Eli Littlejohn (#35) shoots over Highlands’ Kenan Louiz (#13) during Friday’s game. Littlejohn had 14pts and 11 rebounds on the night.

This game started out with Highlands having a hot hand.  The Braves couldn’t get anything to hit the bottom on the net hardly in the first period and trailed 12-5 after one.  That changed in the second period as they outscored Highlands 18-13 to pull with 2pts by the half at 25-23.

The second half was all Braves though as they outscored Highlands 24-12 and 24-13 in the final two periods to win by 21. 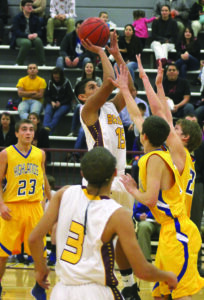 Kennan Panther (#15) shoots a jump shot over two Highlands defenders. He had 6pts in the game.

Dustin Johnson led the Braves with 20 followed by Darius Thompson with 17.  Both teams shot well with Cherokee at 47 percent from the field and Highlands at 45 percent.   The Braves had 12 steals on the night with Jason McMillan and Thompson leading the way with 4 each.