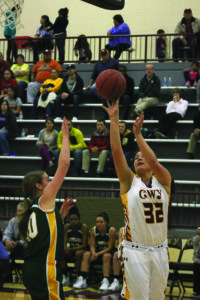 The Lady Braves are definitely winning the possession game so far this season, and they kept it going on Thursday night as they had 22 steals to A.C. Reynold’s 1.  Kendall Toineeta and Avery Mintz both had 4 each followed by Bree Stamper and Brionna Jumper with 3 each.

Toineeta led the team with 22pts followed by Mintz and Stamper with 13 each.  As a team, the Lady Braves shot 40 percent from the field compared to A.C. Reynolds’ 29 percent. 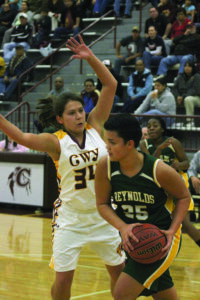 Toineeta, who is the current leader in all of WNC in assists (5.0/gm), had 5 in this game.

Cherokee led 17-13 after the first period and then poured it on in the second period outscoring the Lady Rockets 18-4 to take a 35-17 lead into the locker room.  That lead would provide insurmountable for A.C. Reynolds, and Cherokee would outscore them 31-24 in the second half to take the win. 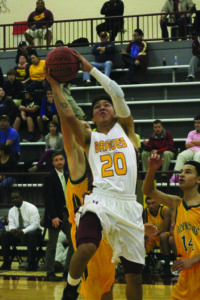 Jason McMillan had a big night for the Braves with 19pts.  Cherokee also won the game of steals with 11 compared to the Rockets’ 1.  Raven Frankiewicz, who currently leads all of WNC in steals, and Dustin Johnson had 3 each. 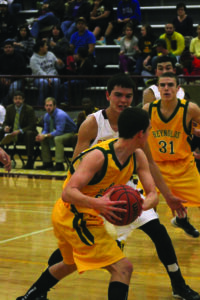 Cherokee’s Raven Frankiewicz (middle) gets in the passing lane between to A.C. Reynolds’ players. Frankiewicz, who is the current leader in all of WNC in steals, had 3 on the game.