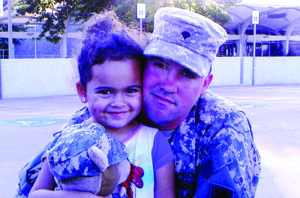 After several years of legal battles, Veronica was turned over to Matt and Melanie Capobianco by her biological father Dusten Brown, a Cherokee Nation citizen, on Monday, Sept. 23.

“We are heartbroken at the loss of our daughter,” said Brown, along with his wife Robin, in a statement just days after she was taken from him.  “I moved heaven and earth for two years to bring Veronica home to her family where she belongs.  And, when I finally picked her up for the journey back to Oklahoma two years ago, we looked into each other’s eyes and it was like we had always been together.”

Cherokee Nation Principal Chief Bill John Baker said in a statement, “Our Nation did everything possible to stop this family from being torn apart.  We used every legal avenue at our disposal to keep this family together.  But, the Cherokee Nation is also a nation with a longstanding history of obeying the rule of law, so that is what we did on Monday.”

Jessica Munday, a spokesperson for the Capobiancos, told the Huffington Post on Sept. 23, “She’s (Veronica) safely in her parents’ arms.”

Some within the Eastern Band of Cherokee Indians are lending their support to Dusten Brown and Veronica.

“I am here to support Veronica and her dad, back out in Oklahoma, to bring her home to where she belongs,” said Traci French, an EBCI tribal member at a small gathering in downtown Cherokee of people supporting Veronica’s return to her father.

“He is not a bad father…he wants his child, to raise his child, and the Indian Child Welfare Act is supposed to keep the Native babies here at home.  I want the Eastern Band to come together and support our sister tribes.  It doesn’t only happen here.  It happens in South Dakota, North Dakota, in Navajo country, and they need to stay home so they’ll know their heritage, their culture, they’ll know who they are.”

Keredith Owens, MSW, an EBCI tribal member from the Yellowhill Community, told the One Feather, “I feel that justice has not been served in this case.  A child’s human rights have been violated, and I say that because they did not give her what we call a ‘best interest’ hearing and she has been stripped from her biological father who loves her and torn from her Tribe and ceremony.”

Owens has been a social worker for 15 years and is a strong advocate for ICWA.  “There have been so many children in my line of work that needed homes, and I worked to ensure that our children remained in an Indian home or a license Native American group home until those children could go back with their rightful family.  There were times that some didn’t get to go back home, but everyone worked hard to keep those children on the Qualla Boundary.”

Owens is afraid this case may have negative ramifications on the future of ICWA.  “ICWA was made to prevent the breakup of an Indian home and ‘protect the best interests of Indian children and to promote the stability and security of Indian tribes and families.’  Veronica has been stripped of this and so have the Cherokee people.  I feel there are going to be some adoption agencies and DSSs that will try and get away without applying ICWA and will ignore ICWA and go off of the ruling that the Supreme Court made.  But, in the end, their ruling is wrong and each time that an agency uses that determination, they will violate a person’s human and civil rights.”

Veronica was born on Sept. 15, 2009 and was taken shortly afterwards by the Capobiancos who arranged a legal adoption with Veronica’s birth mother Christy Maldonado.  Brown filed a motion in 2010 to assert his rights as Veronica’s biological father, and in November 2011, a South Carolina family court ruled in his favor.

A month later, Brown took Veronica home with him to Oklahoma.  The Capobiancos filed an appeal to the South Carolina Supreme Court, and in July 2012, that body ruled for Brown.